I can still vividly remember the first time I tried a No Label beer: the very polarizing Don Jalapeño. After work on a rather warm Wednesday evening in May, I sought shelter inside the Stag’s Head just off Richmond. Before even taking my first sip, the aroma hit my sinuses, the sweet but fiery pepper tickling the back of my nose, with just a hint of a citrusy “beachy” finish. The taste was everything I expected from the smell, that first sip lingering on the back of my throat for quite some time, as the heat had coated the roof and back of my mouth. This was, I immediately thought, a jalapeño masterpiece. I couldn’t wait to have more. 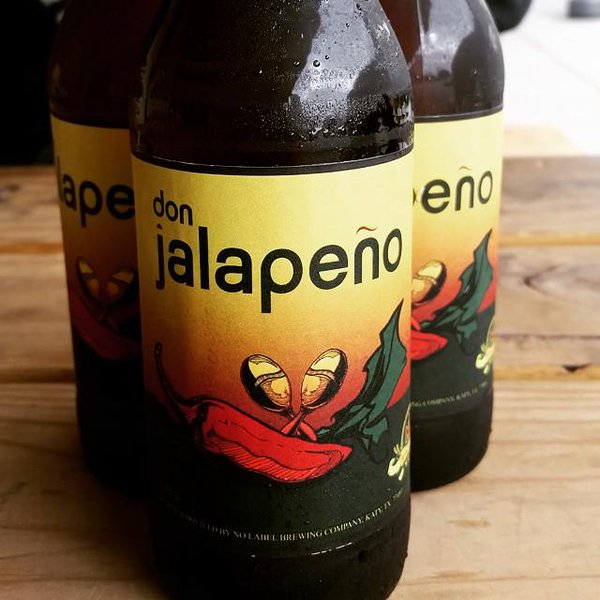 Sadly, the Stag’s Head is no longer, and soon the same will be said about Don Jalapeño. No Label has announced that this batch will be their last of the beer I so enjoyed, as they make room for new brews such as a “Mojito Lime,” “Citrus Ginger,” and new DIPA. Disheartened to see one of my favorite Houston beers disappear forever, I caught up with No Label co-founder Jennifer Royo, who assured me that the move was a good one. “We are making room for new, exciting seasonals … rest assured, Don Jalapeño will be replaced by some amazing new beers.”

No Label, the Katy stalwart, unfortunately is not “No Limit” and is constrained in production, so ultimately some brands have to be retired. Jennifer explained, “we are limited by our size, tap handles available to us at bars, and the shelf space available to us in retail, so we need to keep our lineups new, fresh, and exciting.” This means more room for new beers, as well as new entrants in some of the brewery’s experimental series, such as the Hop Solo line of beers.

Still, one can’t help but lament the loss. The beer was one of the first seasonals No Label produced, with Jennifer’s uncle providing the peppers from his own garden. While it’s true that pepper beers can be divisive, as many can’t handle the heat, I always felt that Don Jalapeño served as a nice Houston symbol: down here, food is hot and flavorful. And as for the various other spicy beers that No Label has made? Well, it seems like that era of heat might be ending: Don Gusano, the one-off Mezcal Barrel-Aged Don Jalapeño produced for the Wild West Brew Fest in 2015, remains only a one-off, with no plans to ever return. One iota of hope remains, as Jennifer explains, “What the Hatch may come back, as we know Hatch season is big!”

Here’s hoping that’s true, and more to the point, here’s hoping even one day Don Jalapeño returns from the dead. In the mean time, I’ll miss that heat, and look back only on fond memories of the fiery beverage that once somehow cooled me off on such a hot day.

A Preview of Houston Press BrewFest [Plus a Ticket Giveaway!]