Balanced. That’s the best way to describe everything about Fetching Lab Brewery in Alvin. Whether you’re referring to beer flavor, their beer lineup, where you can buy their beer, or even the dynamic between owners Brett Bray and Theresa Hutchings, everything is in perfect balance.

Brett and Theresa have taken their love of homebrewing to full production over the past year. A breakout showing at the Brewmasters Craft Beer Festival in Galveston during Labor Day weekend showed that the new kids on the block were to be taken seriously in the Houston-area beer scene. Their Bound & Determined was a personal favorite of ours that was unlike anything else I had ever tried, but I’ll get more into the beers a little later. 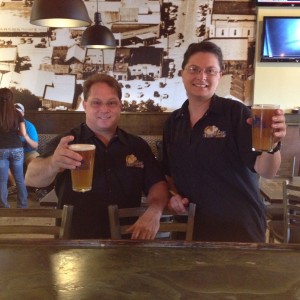 The owners of the brewery do it all: coming up with the recipes, brewing the beer, cleaning equipment, making necessary repairs, managing the website, marketing… if you think of a task, they are doing it. For example, they have an ingenious way of keeping their cooler room at the right temperature without costing several thousands of dollars. They have rigged up a window unit that runs icy cold by using an override sensor that tricks the unit into thinking it’s running at 60 degrees. Instead, it’s cooling the room to about 38 degrees. It’s part of the do-it-yourself movement that you see with many of the smaller breweries in the area, especially the ones in Galveston County.

They usually brew five barrels at a time on their seven barrel system. One of their fermenters was originally a wine fermenter that they say was a great step in moving up from a homebrew system to a professional system. Another unique aspect about the brewery is that it’s located on their personal property. When asked about it, Theresa mentioned that when they were planning the brewery, they ran into the problem of how they were going to pay rent while getting all of the permits and licensing secured. Having property to support the facility, while waiting for the TABC to grant their licensing, solved the problem because the “rent” is paid to back to them. 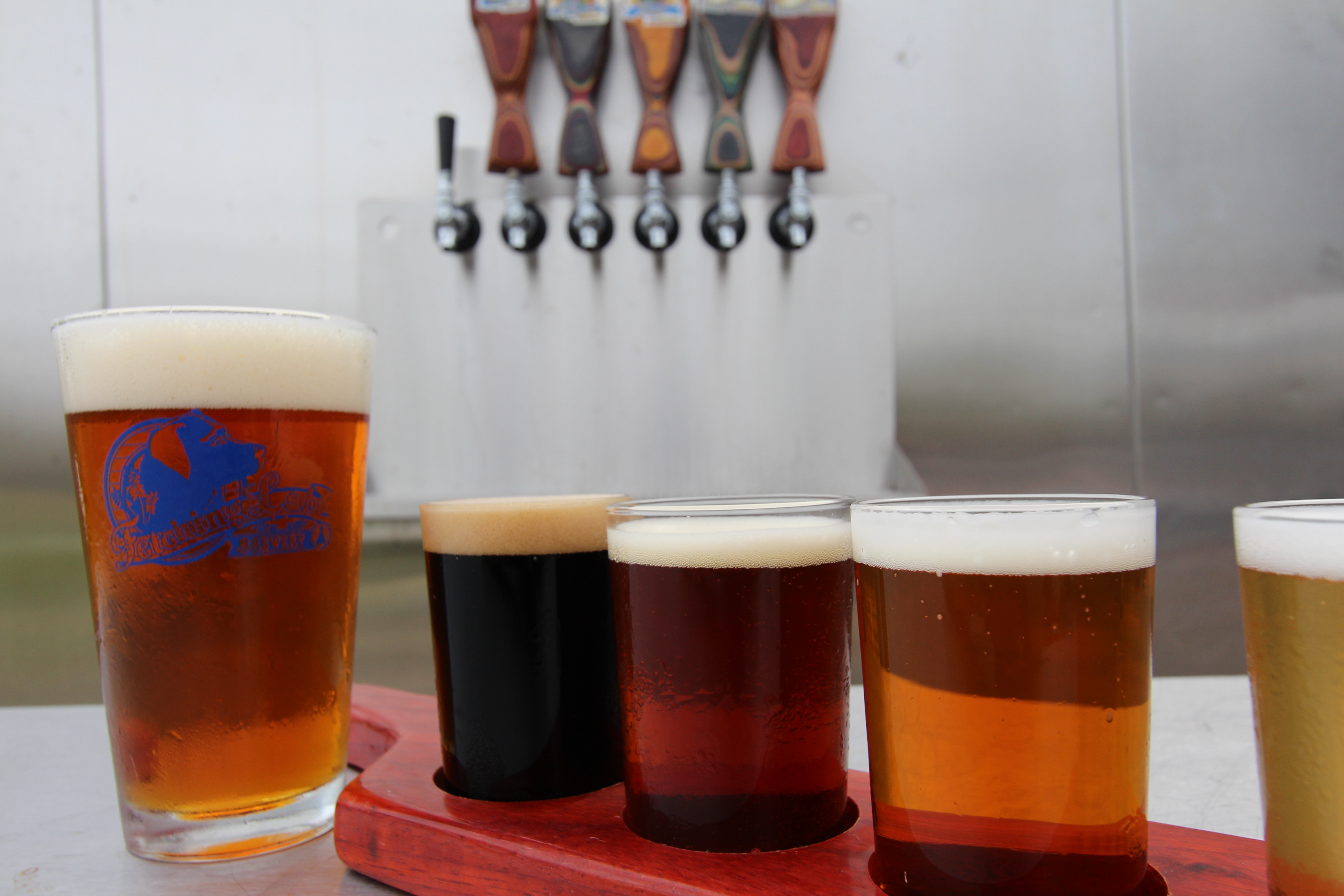 If you’ve been to some of the beer hot spots throughout the Houston area, you’ll notice that the name Fetching Lab keeps popping up on the tap list. Whether it’s their Round Up amber, Laelaps IPA, or their outstanding Bound & Determined chile stout, you’ve probably come across the name and asked, “Who’s that?” Recently, they signed a distribution deal with Wandering Boots Distribution Company. Part of the reason for using a smaller distributor was the personal attention. Being that Wandering Boots is a startup company like Fetching Lab, they were able to devote 100% of their time selling one brewery to bars throughout the Houston area. Currently, Fetching Lab beers are in Harris, Galveston, Brazoria, Fort Bend, and Montgomery counties with more places being added regularly.

My favorite beer is the Bound & Determined. Unfortunately, it’s about to go into hibernation for the spring and summer, but the beer has an amazing story behind it. If you know anything about New Mexico, it’s that the Hatch green chile is king and there is no other chile that is worthy. With Theresa originally being a New Mexico native, she wanted to join Brett’s team for a homebrewing competition by brewing a stout that was infused with Hatch green chiles. Brett had already entered the competition and was going to brew a pumpkin beer, but Theresa was determined to enter her own recipe, so she and a family member brewed, refined, and entered the green chile stout. It was a landslide winner and upon tasting it, Brett knew this would need to be part of the brewing lineup that would eventually be Fetching Lab Brewery. Bound & Determined plays on the determination that Theresa had to not only be included, but to make a beer so good, you had to take it seriously. The beer itself has a perfect balance of chocolate with a dark fruit flavored body finishing off with just a slight kick of chile on the finish. Nothing is overpowering and the flavors are subtle, which makes the beer incredibly drinkable and light for a stout.

Looking ahead for the future, Fetching Lab has several brews on the horizon. Their spring and summer seasonal, Breaktime Wheat is going to be coming out soon. A light and refreshing beer designed to combat Houston summers, it’s an American wheat that is the definition of a session beer. Another seasonal they hope to release for the summer is a blueberry wheat beer I was lucky enough to try, tentatively named Blue Mischief. Subtle blueberry flavor finishing with a crisp floral taste, this beer is going to be a hit when it comes out in the warmer months. Finally, another beer in the lab phase is a juniper rye that is unlike any beer I’ve enjoyed. There is a secret ingredient in this beer that they wouldn’t share. I think it’s honeysuckle due to the floral flavor, but I’ll have to see what the final product will taste like. 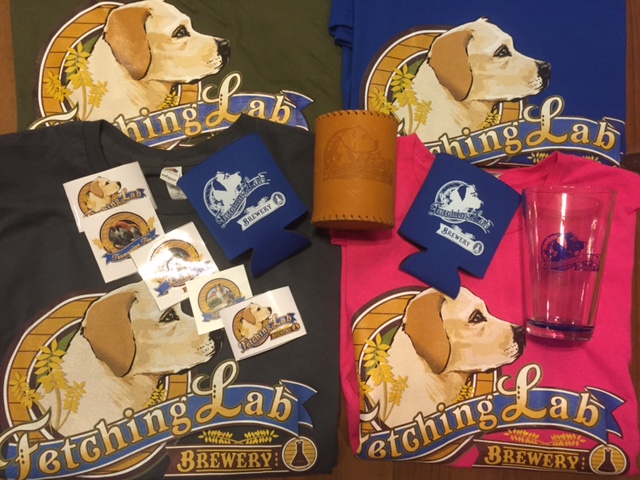 There are several things you need to know before planning a visit to the brewery. As we mentioned, it’s located on their personal property. The owners still have day jobs, so be respectful that time is precious. However, they want to be open to the public as soon as possible. They will be making several improvements to the property that should allow for the spring and summer months to include tours and tastings. They have a lake in the back where they plan on building a deck to enjoy a brew or two overlooking water in an idyllic country setting. Plus, they hope to add some pergolas to give the property a more comfortable feeling that will welcome you to the brewery.

If you find yourself looking at the other full-production brews in their lineup, know that Round Up amber, Laelaps (pronounced LAY-laps) IPA, and Teumessian (pronounced Too-MESSY-ehn) Fox pale ale are all designed to be well-balanced, sessionable beers. Fetching Lab’s goal is to provide craft beer that is accessible for all types of beer drinkers. They want to be known for subtlety and balance, which makes for perfect beers to drink throughout the year in Texas.

ABOUT THE AUTHOR Tim Foley

As a native Houstonian and current Galvestonian, I love the Texas Gulf Coast region and all of the craft beer it has to offer. As editor of SHADEtxCraft.com, I focus on the Texas craft beer industry and how our state serves some of the best beer in the U.S.