Is it Worth it to Stand in Line for Beer? 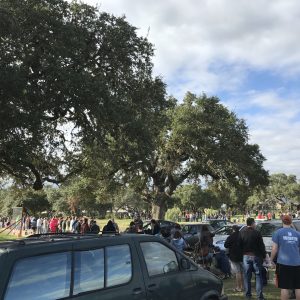 The Line for Spon on Friday at Jester King.

I’ve read the articles against standing in line for beer. Thrillist recently wrote one, and there’s an entire thread devoted to debating the subject on Beer Advocate, but here I sit, in my second line in a week for beer. The question you may ask is why? Do I not believe there are great beers sitting on the shelf at the local supermarket or Specs? Well, I know there are, probably ones that are better than whatever my line waiting ends up with. So what drove me to wake up at 5 AM this morning to drive the 30 minutes to wait in line at Hay Merchant? What drove me to caravan 3 hours to Austin for the Jester King Spon release last weekend? Why am I doing this when, right now, sitting on a shelf somewhere, is an equally amazing beer that I could have slept several more hours and picked up at my leisure? Why?! My wife really wants to know…

Reason 1: I’m an obsessive personality. I imagine many of the people in these lines are. People like me get an idea in their head and it’s tough to beat it out with things like logic or reason. Those things are for other people to worry about. I want a bottle of Atrial!!

Reason 2: They can actually be quite a bit of fun. This isn’t waiting in line at Disney World with your daughter constantly reminding you how bored she is. No, this is community. Something about that guy next to you drove him to do this as well.

Reason 3: Odds are someone is sharing something. In the Jester King line, I stood with several other HBG writers and as we took turns getting beers, other people we knew came around and shared something. The best beer I had that whole day wasn’t Spon, it was someone’s home brew that was being passed around. It was outstanding. I would have never have had that opportunity to meet that person, but maybe I run into him again somewhere else down the road. There were bottle shares going on all over the place in the line as we waited, and the atmosphere was fun and jovial. Even the early morning Hay Merchant line had a few beers popped; I stuck to the free donuts at that one.

Reason 4: The anticipation. Remember as a kid when you were pretty sure you knew what you were getting for Christmas, but you were still excited about it? At the end of that line, there is beer, and maybe you pop that bottle that night, or maybe it’s months from now, but you have it and you can be excited about it until you do. You can take it to that share you got invited to and feel you have something unique and interesting, but most importantly you have a story to share.

Reason 5: You make friends or you spend time with friends that go with you. I stood next to the same few people for 4 hours on a Friday morning at Hay Merchant. We talked beer almost the entire time, but you sprinkle in some getting to know them. At the end of the day you probably have a new social media friend or a few. Maybe you stick around and have a beer with them. I can guarantee you learn something about beer by the end of the time. I still chat from time to time with the guy I stood next to in last year’s line. Even if they aren’t near you, you recognize people from other beer related events. That guy with the Brash hat, yeah, he wears that hat everywhere, bad ass! 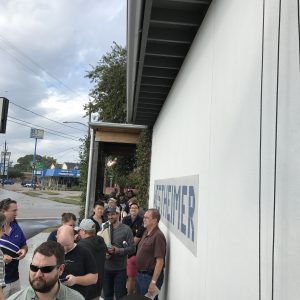 The line for Black Friday at The Hay Merchant.

If you’ve never stood in line for beer, let me pass on a couple of tips. First, take a chair, that ground or concrete won’t be that comfortable. Do make sure that chair is easily foldable though, and definitely have a way to carry it over your shoulder when the line starts moving. Second, bring something to eat if nothing is being sold. It can be a long wait. Many times even though something goes on sale at a certain time, it can be quite some time after that before you get your beer and pay for it. Keep that in mind. Third, be friendly, and don’t dare think of cutting. This isn’t elementary school, we’re all adults, be courteous of those behind you. If someone needs to go to the bathroom or get beers, that’s cool. You know who is standing around you. Just don’t be that guy that rolls in a few minutes before the release time and hops in line with his friend at the front. Fourth, be nice to the people dealing with the crowd or selling the beer at the end of the line. They’re working pretty darn hard on days like this. Fifth, think about bringing a bag, especially if you’re going to be buying more bottles than you can carry. Odds are they’ll have a carrier or box for you, but I’ve seen beer dropped or fall through a battered box too many times. It’s brutal to watch, you don’t want to be the person that waited for a few hours to drop his beers as he tries to unlock his car, or as happened to my friend, stain his carpet when the beers fell through the bottom of his box when he got home.

With that, I know this isn’t for everyone. Do you want to chat about beer for a long period of time? If you’re social like me, then probably yes. If you’re not, then take a friend. If this sounds like torture, then maybe it’s not for you. Are you in it only for the beer? Then maybe this isn’t for you either. Like I said, there is  probably equally as good stuff on the shelf. However, if you’re looking for an experience, and something to have a story for as you pull that prized bottle out of the fridge, I challenge you to give it a shot. Worst case, you hate it, you hate the beer, and you wish you had those hours of your life back, but hey, you’ll still have a buzz.