Some months ago I penned a short review of home delivery services for craft beer in the Houston area. In that post I lamented that Greater Houston lacked a true beer delivery service like Hopsy in the California Bay Area. While our local supermarkets and liquor stores were offering delivery services for their products, nothing was truly fulfilling the promise of getting brewery-fresh beer to your door at a reasonable price.

Since that time, Drink of Ages in Montrose has started delivering fresh draft beer to the immediate area around the pub for a $5 fee, but what’s really gotten my attention is the new service offering from a group calling themselves HopDrop. You may have seen the ads pop up in your Facebook feed over the past few weeks crowing over yet another partnership with a local Houston craft brewery and advertising their December 1st launch. The faults of the current delivery services in Houston are what HopDrop aims to fix, namely that they are too expensive, too slow, don’t deliver what people want, or don’t deliver to enough places.

Fundamentally the premise of HopDrop is tantalizing: get freshies from local breweries delivered to your door nearly immediately for about the same price as you would pay if you went out to get it yourself, save for a $5.99 delivery fee ($3.99 if scheduled at least 24 hours in advance). From what I could tell, their inventory focuses on the types of tap-room-only offerings and far-flung breweries that would otherwise require a special trip. As an example, on launch day they had crowlers of Houston Haze and Hops Drop from Spindletap, Wheez the Juice and Wheez the Shake from B-52 and at least one of Baa Baa Brewhouse’s current taproom NEIPA variants. On top of this were the draft offerings of new breweries like Texas Leaguer and Great Heights. They also had a good selection of other Houston beers including special releases from Brash, Eureka Heights, City Acre and No Label. 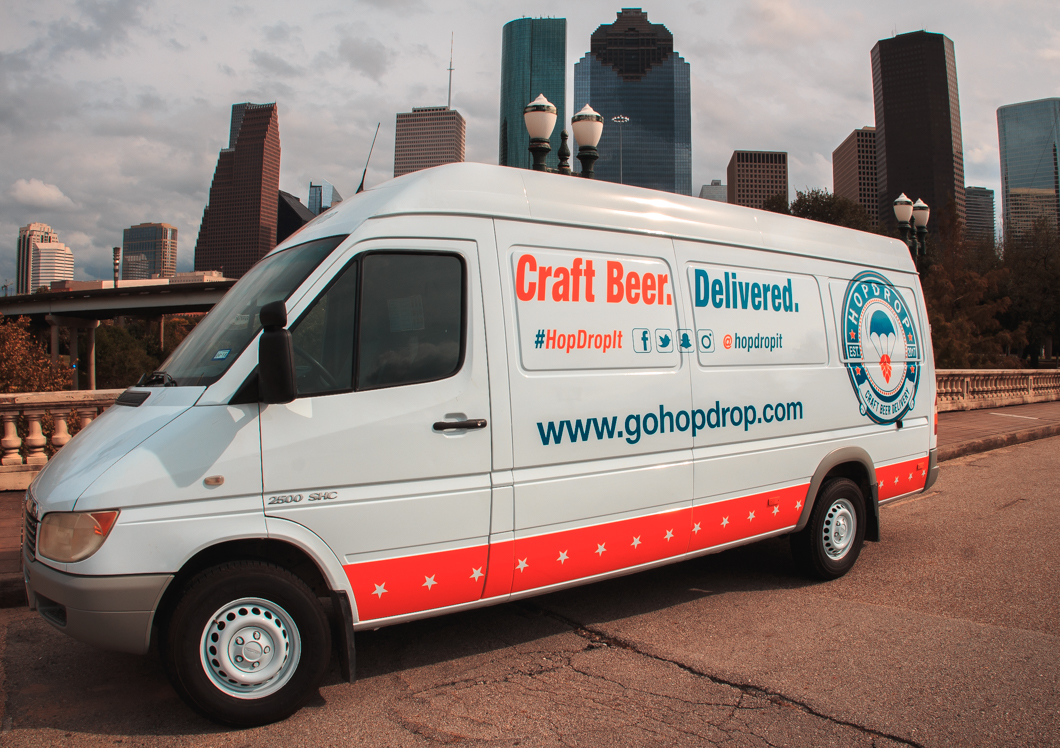 HopDrop currently has one delivery van, but they plan to add vans as they expand. | Photo: HopDrop

Since I live in their pilot launch area of Greater Heights/Rice Military/Oak Forest/Montrose I couldn’t wait to give it a try. My first order on December 1st included 100 ‘points’ that were redeemable for a $5 discount on my order, essentially refunding the delivery fee. The website is very easy to use: signup took less than five minutes and the inventory can be sorted by style or searched. Big, easy to read tiles with pictures of labels and beer descriptions including recipe basics, ABV, and IBU make shopping a breeze. Ten minutes after clicking submit on gohopdrop.com, the delivery van was outside my door putting my five cold HopDrop labeled aluminum crowlers into plastic snap carriers.

I got a good look into the van, and it’s filled with small chest freezers and coolers to keep the beer cold while it’s being delivered. The crowlers have their contents Sharpied onto the exterior of the can. I talked a little bit with the two men doing the work that day, and got a sense of how the service works. They have what they call a mobile crowlering machine that they take to brewpubs and to at least one growler shop (Growlers USA in Katy) for filling. They purchase beer (they told me mainly kegs) at retail and then use their machine to seal the beer onsite. They said they have offsite cold storage and as I saw keep the beer cold in the vans when it’s out for delivery. Ultimately they want to link their ordering system into brewing schedules so that they are packaging beer at the moment it’s ready and then delivering it all as quickly as possible – an end to end focus on freshness. They told us that no beer stays in the can longer than two weeks. 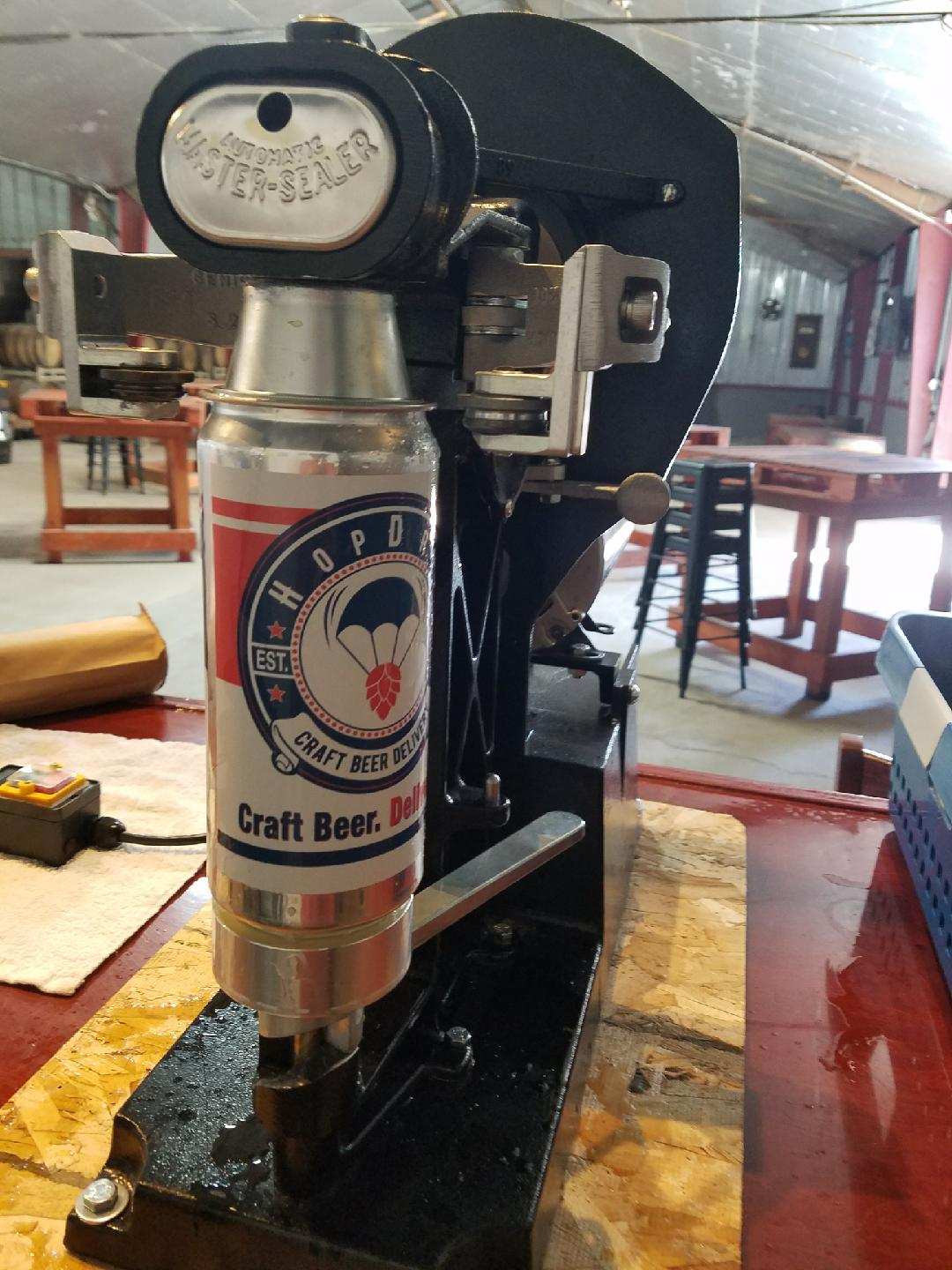 The other question floating around in the local beer forums and certainly in my own mind is a big one: is this legal? We reached out to HopDrop with this exact question, and we got a chance to talk to co-founder Steven Macalello. Without delving into very much detail, he summarized the legalities of their operations as follows:

“What we do is facilitate the transaction between a retailer and the consumer. Think of us like Paypal or a credit card processor for the retailer. We don’t carry inventory until it’s in transit to the consumer. This is a very important distinction.”

Regarding the legalities of the model, Steven said HopDrop had consulted with experts in TABC code, and that, “…with their guidance we were able to develop our business model 100% legally.”

Steven and the guys in the van that came to my house reinforced two things repeatedly: HopDrop is focused on getting the freshest beer they can to consumers as quickly as possible, and do that for a fair market price.

I also reached out to breweries around town to get their take on HopDrop. Some confirmed they were working with them directly, while others didn’t realize that their beer was being offered through the service. This seemed to confirm that HopDrop is using a combination of onsite crowlering at brewpub tap rooms while also sourcing beer from bottle shops/retailers. HopDrop wouldn’t confirm to me exactly who is ‘partnering’ with them or where specifically they are getting each of their beers on offer.

I for one hope that HopDrop is right, and they are on the right side of the law. As one that watched the TABC’s antics unfold in their 2015-16 attack on the legality of crowlers, I can’t help but be nervous that HopDrop is headed for the same type of conflict.

Anxiety over the future notwithstanding, as I wrap up this post I’m enjoying a radically fresh Wheez the Juice at my living room table and marveling in the promise that HopDrop offers anyone in Houston who loves fresh, local beer. If you live in their ‘pilot’ delivery area, get on it!

To see the full list of beers and breweries offered, visit gohopdrop.com/