Although pumpkin beers have been around for centuries, their popularity has definitely increased in proportion with other pumpkin spiced goods. Go down the grocery store beer aisle, and there will be countless pumpkin spiced options. Some of these beers are good, some seem just to be following the fad, and some stand out above the crowd.

Saint Arnold Pumpkinator recently won Gold in the pumpkin beer category at The Great American Beer Festival, and it’s easy to see why. I fell in love with this beer in its original release as Divine Reserve 9 way back in 2009. The dessert-like qualities of the beer brought to mind Thanksgiving and pumpkin pie. Now it’s a beer I enjoy every Thanksgiving as I’m laying around watching football in a food coma. In 2015, Saint Arnold decided to age this wonderful beer in Woodford Reserve bourbon barrels and released it as Bishop Barrel #9. I, of course, tracked this down at a local bar and thoroughly enjoyed it. When the opportunity arose to get a bottle of this year’s bourbon barrel aged Pumpkinator in advance of its public release, I jumped on it. I was excited to see this beer finally being released at a retail level, instead of the bar/restaurant-only level of the older Bishop Barrels. I also thought this would be a fantastic opportunity to crack open my last Bishop Barrel #9 (BB9) from my cellar for a side by side review. I’ve always sworn by the practice of aging the original Pumpkinator between 1-2 years before enjoying; it’s one of the few beers out there that I think improves with a little age. So naturally, I was curious to see what had developed with the aging process on the bourbon barrel aged version of Pumpkinator as well. 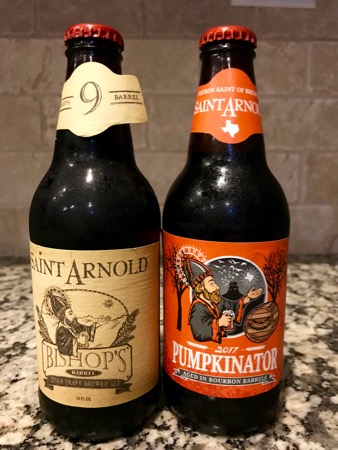 When you drink Pumpkinator, you want to let it warm up some to bring out the spices and body. Saint Arnold recommends that you let t warm to at least 50 degrees Fahrenheit. I pulled both bottles out of my fridge about 30 minutes before opening them. I poured about 1/3 of each bottle into separate snifters. I opened the BB9 first, and the smell absolutely brought me everything I was looking for. It smelled just like pumpkin pie baking in the oven. There’s always that moment of wondering when you open an older bottle – Did it last? Did it oxidize? Is it infected? The answer to all of these questions was “No” for this bottle. The younger bottle produced an identical aroma, and even sitting on the patio on a muggy night, the smell in the air was wonderful. I tasted the older BB9 first, and it was everything I was hoping for. Thick mouthfeel, flavors of pumpkin, clove, and nutmeg, and such great qualities coming from the bourbon barrel – vanilla, oak, a hair char, and some lingering booze. It was a special treat.

The newer release of bourbon barrel aged Pumpkinator was significantly different than the older BB9. Although also aged in Woodford Reserve bourbon barrels, the newer bottle came across much more boozy than BB9. If I were blind tasting these two beers, I would have immediately thought the older one was aged with an older bourbon barrel than the newer one. Instead of the flavors melding together like the older version, the newer beer is less complex. The flavors that were harder to detect in the new bottle were those coming from the barrel itself. The vanilla, oak, and char were mostly absent or at least less pronounced. The newer version also has a thinner mouthfeel, and it was harder to detect the pumpkin itself. Although I intuitively know that the newer bottle should have a stronger spice flavor, I thought the booze was masking it too much in comparison to the flavors of the older bottle. I still enjoyed the newer version quite a bit, but they were significantly different beers.

I shared the rest of both bottles with a few beer loving friends in order to gather their opinions as well. Everyone that tasted the two liked the older BB9 more. When I explained they were the same beer, just 2.5 years release difference, everyone said they’re going to buy some on Monday to forget about for a couple of years. It’s a complete argument against the Drink Now movement, but if you can get your hands on a couple of the new barrel aged Pumkinator I’d strongly encourage you to pop one now and save one for later. I think you’ll be happy you did.