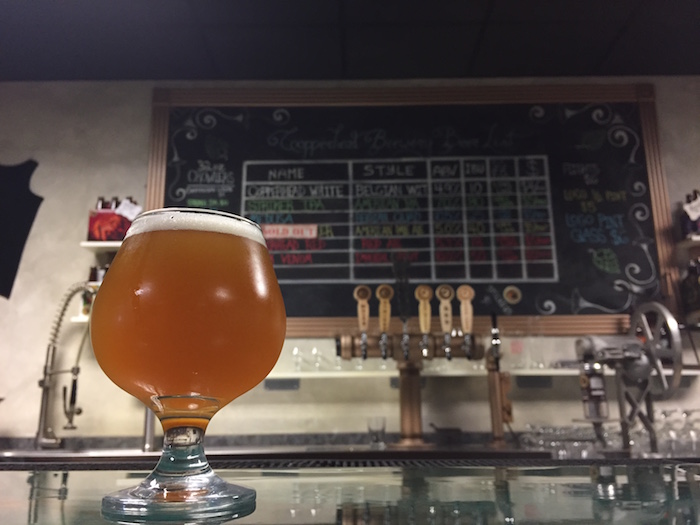 Apparently I should write about things I want to see happen more often. Since publishing “Who will be Houston’s Trillium or Tree House?” a handful of our area breweries have gone public with their intentions to attempt to brew a beer closely adhering to the style hallmarks — huge tropical fruit flavor thanks to obscene amounts of post-boil dry-hop additions during whirlpool, fermentation and/or under CO2 pressure of uber-popular citrusy hops like Citra, Galaxy, Mosaic, Nelson, Amarillo and El Dorado; super-soft, creamy and juicy body/mouthfeel as a result of the interplay of the water treatment, specialty grain bill and London Ale (1318) or English Ale (007) yeast strains; and minimal (but still present) lingering bitterness due in part to almost no kettle hop additions — of the supernova that is the Northeast-Style India Pale Ale (NEIPA), or at least their interpretation of such.

Baa Baa Brewhouse was among the first to respond, and I enjoyed their initial stab at it, which they are now tweaking in preparation for a more scaled-up release on March 4. Katy’s No Label then announced last week that they are taking a stab at a double dry-hopped New England-Style IPA; as did Spindletap (while also coining #HoustonHaze); it was mentioned in the comments of my Cow Jumped Over the Moon review that Sigma is also planning one (though I haven’t seen an official announcement anywhere yet); and there are a couple of forthcoming breweries with exciting plans whose beers I am very eager to try. In the midst of this flurry of activity, Conroe’s Copperhead Brewery also announced the release of their own double dry-hopped Double IPA, Feeding Frenzy, and were kind enough to invite me out to try it.

Brewed with copious amounts of Citra, alongside Comet, Amarillo and Apollo, Feeding Frenzy announces itself immediately with its huge tropical aroma. It’s a fairly deep orange in appearance, with Fawcett Maris Otter and flaked oats in the grain bill, and pleasantly hazy. Flavor-wise the citrus is robust and plentiful; there’s absolutely no mistaking this beer for anything but Citra-dominated. And it is deceptively, dangerously easy to down for the 8.0% ABV. In fact, it may well be the tastiest Houston-brewed DIPA I’ve had — I actually said the same thing last time I had a Copperhead DIPA almost a year ago, and it’s clear owner and brewmaster Seth Earnest knows his way around hops.

Of course, you’re probably wanting to know whether I thought it was a good representation of a NEIPA. And, my answer is that it’s actually not an NEIPA (nor did Seth say it was one). Granted, Feeding Frenzy was brewed utilizing many of the aforementioned NE-style techniques (and these days specifically calling out double dry-hopping is a signifier in the northeast in particular), but the beer was also fermented with Chico (or American Ale) yeast, which, while historically hailed for its clean character, doesn’t lend itself to the creamy/juicy/soft mouthfeel that is a critical component of the style. As such, Feeding Frenzy still finished decidedly West Coast for me, with a bit of a harsher bitterness than I’d want in an NE-style beer. Seth mentioned to me that for the next batch, which will be appropriately scaled up, he plans to pitch Conan yeast instead, which is best known as the strain that made Heady Topper the most sought-after beer in the world three years ago. I’ll be curious to see what Conan does to Feeding Frenzy, although in my experience, the yeast strain really needs to be either 1318 or 007 to nail the Northeast-style mouthfeel.

That all said, I want to reiterate: it was still a very good beer. And ultimately it doesn’t even matter what I think as the beer was an unequivocal success in their taproom this past weekend, prompting Copperhead to add a new batch to its brew schedule roughly every other month going forward. And there’s even more great news for fans of beer in cans (a.k.a. everyone): while the next batch of Feeding Frenzy will be available in 4-packs of 12-oz. bottles to-go directly from the brewery, Seth intends to start canning all of their hoppy beers in the not-too-distant future, with flagship Striker IPA first up to hit six-packs of 12-oz. cans, eventually followed by Feeding Frenzy later on down the line.