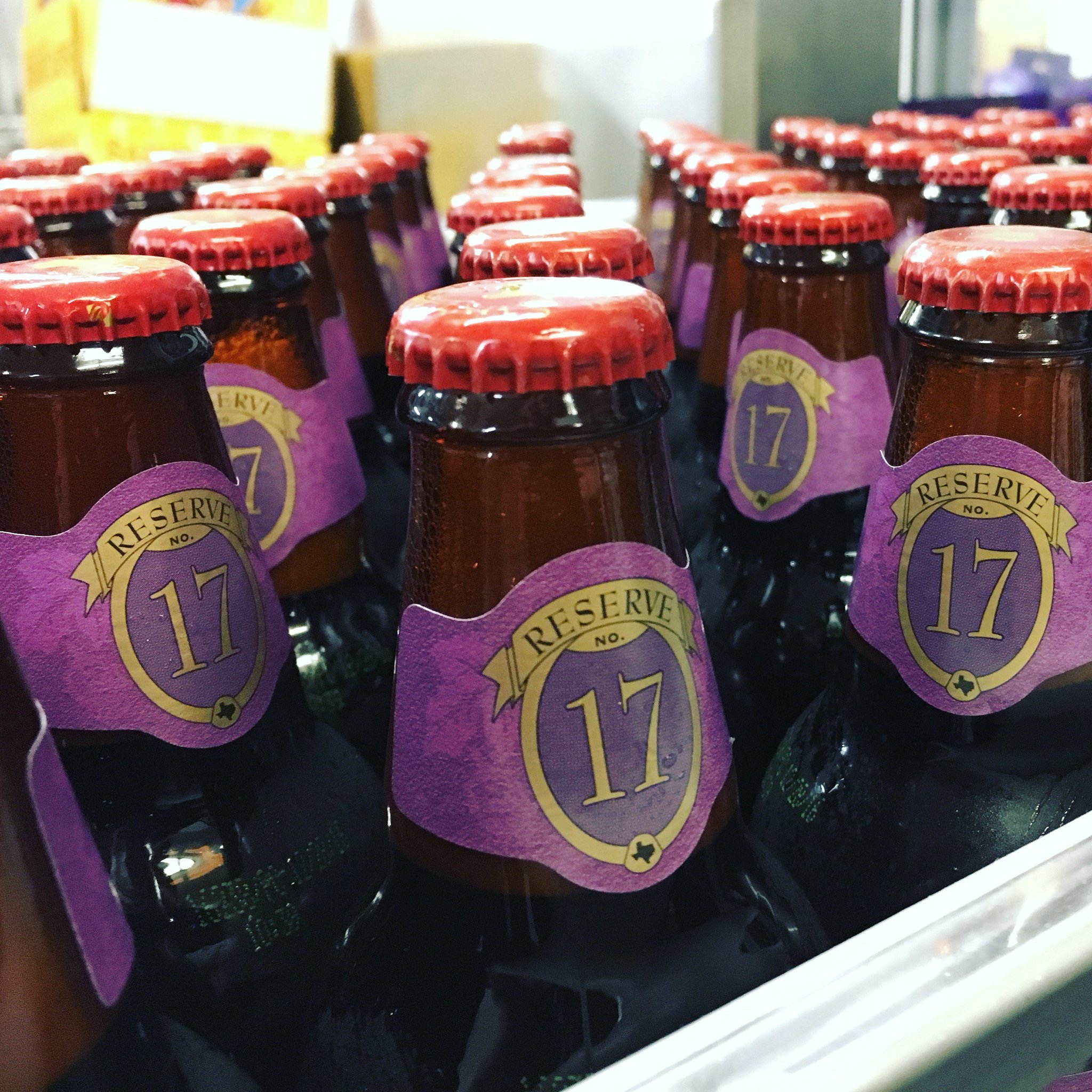 I haven’t had loads of Baltic Porters in my drinking life. Like most of you, my first taste of the style came from a homebrewer’s version (via Beeriac/Mike Heniff at a long ago Foam Rangers meeting, I think), and my commercial experience is with Baltika 6. The new Divine Reserve 17 offering from Saint Arnold squares nicely with what I know and have tasted before – roasty and malty, easy drinking and clean, almost dry, but with tons of malt flavor that stands out. In my experience, it’s a hard style to get just right, as it demands precision in ingredients and technique. Fundamentally it’s imperial stout for lager drinkers, but without the benefit of debittered malt that makes a schwarzbier hum. Making Baltic Porter seems a lot like the end of Jenga game where you have to start taking out side pieces and balancing them on top to push the tower higher.

Did everything come crashing down with Saint Arnold’s play on this style? I don’t think so.

I took a 12 oz bottle out of my beer fridge and poured it into a bubble glass to warm a bit. In the glass, the beer is an inky brown with a dark ruby undertone. It formed a khaki brown head that dropped back to a ring around the edge of the glass that hung around with me through the entire session.

The aroma out of the glass is a mix of chocolate malt with vanilla and a faint fruitiness, somewhere between plum and sweet cherry, and a whole lot of straight up roastiness. Not that I’m in the habit of smelling bread – but the aroma of this beer sure seems a lot like what it would be like to huff warm toast.

There was lots of bitterness on the initial sip, almost sharp. This immediately gave way to a burst of sweet roasted malt – the same chocolate-driven flavor as in the aroma. Not much caramel, just a little sweet and bready, with a strong bite of roasted malt at the finish. Not chewy or thick in any way; you could almost describe it as thin, as though it seems to have just the minimum amount of body it needs to carry the flavors through. As the sip warms up, the alcoholic heat (~9.2%) drives some more sweetness from the beer and keeps going. I didn’t notice any heat at all until a few minutes after the sip. Aside from the immediate first taste, I don’t get any significant hop bitterness. No yeast character at all; it’s very clean.

This is a good beer. The flavors are on point, it has a really nice malty backbone that is nuanced – part chocolate, part roasted, part heavily kilned malt that adds bitterness. None of those component flavors dominate any of the others. It drinks smoothly – the use of lager yeast keeps the beer focused; this is a malty brew and there aren’t any distractions from that. With the exception of the bitterness on first sip, none of the other flavors are overwhelming. There’s a nice vanilla component and some fruit (mainly in the aroma), but no serious heat and nothing that touches the clear roasted malt flavor that comes through after each sip.

So as I finish this admittedly good beer why am I not excited? Why am I not clamoring to open my next bottle? I’m not entirely sure, but I think it has something to do with the maltiness, which just reminds me of the wonderful flavors of Avery Czar – an Imperial Stout. On second thought maybe it’s that the slight booziness and fruitiness on the finish that is makes me think about the incredible bourbon flavor that comes through so strong in The Bruery’s So Happens It’s Tuesday. Again…another Imperial Stout.

My bottom line? As a fan of big imperial stouts, DR 17 just makes me want to drink those. Perhaps, like Santo this is the ‘dark beer’ that can convince the members of the SA Army that don’t like Impy Stouts to come to (heh) the dark side.

What I am intrigued by is what the monkeys in the barrel room on Lyons could do with this brew. Could this wobbling tower of taste go just a little higher with the addition of some bourbon barrel character? Could this recipe be turned into something crazy good and funky with an inoculation of bugs and some fruit (can you say Almanac? I knew you could). This is two DR releases in a row where I’m more interested in what it could become in barrels or as a variant than what it is right now. Turning a lager like this into a palette for further experimentation could be a fool’s errand, but that’s just what the first floor of the brewery was built to do.