As a big fan of lagers, and in particular Märzens, I was very excited, nay SUPER EXCITED, when I first heard that Saint Arnold Brewing was releasing a true Märzen as their new Icon Red. And as a big fan of Saint Arnold’s portfolio of lagers, I was eager to see how this turned out. While I enjoy their normal annual fall release ‘Oktoberfest’, it is technically closer to a Scottish ale, and is not a Märzen lager. Spoiler alert: I am very much hoping to see BOTH brews every fall from now until forever.

Märzen-style beers have been brewed in some form or another throughout Europe since the early days of beer. Though more commonly associated with Germany, due to the beer’s association with Oktoberfest, these “March” beers were often made in many regions during the spring, then stored (lagered) in cool caves, and consumed throughout the summer while brewing operations ceased due to the risk of bacterial infection. The remaining beer would eventually be consumed in early fall, before the start of the new brewing season. In 1810, the first Oktoberfest celebration occurred in Munich, in the Bavarian region of southern Germany, to commemorate the wedding of Crown Prince Ludwig I. In 1841, Munich’s Spaten Brewery unveiled what is considered to be the original Oktoberfestbier Märzen, and the annual celebration would incorporate the style as the primary beer consumed during the festival.

Many American versions of Oktoberfest beers are more closely related to Vienna lagers than Bavarian Märzens, though both are brewed to celebrate the festival and season by breweries around the world. While the two styles are both historically and technically very similar, Vienna lagers tend to be paler, drier, and have a touch of bitterness often missing from the Munich-style brews. Traditional Märzens are generally more amber in color, full-bodied, maltier, and a tad sweet.

Though it is tough to live up to the lofty standards of certain Märzen classics from breweries like Ayinger and Hacker-Pschorr, Saint Arnold Icon Red Märzen is the closest thing to a true Märzen I’ve tasted in a domestic version. 100% Munich malt is used, along with Perle and Hersbruker hops from the Hallertauer region just outside of Munich. They also incorporate the classic brewing method of decoction mashing, where part of the mash is removed, boiled, and returned to the main mash. This creates more caramelization of the malt, and leads to a greater depth of character in the flavor. The practice is laborious, and few modern breweries integrate it into their brewing process, as standard malts tend to be well modified, making decoction generally unnecessary. Saint Arnold also uses the method in their 5 O’Clock Pils, with great results. 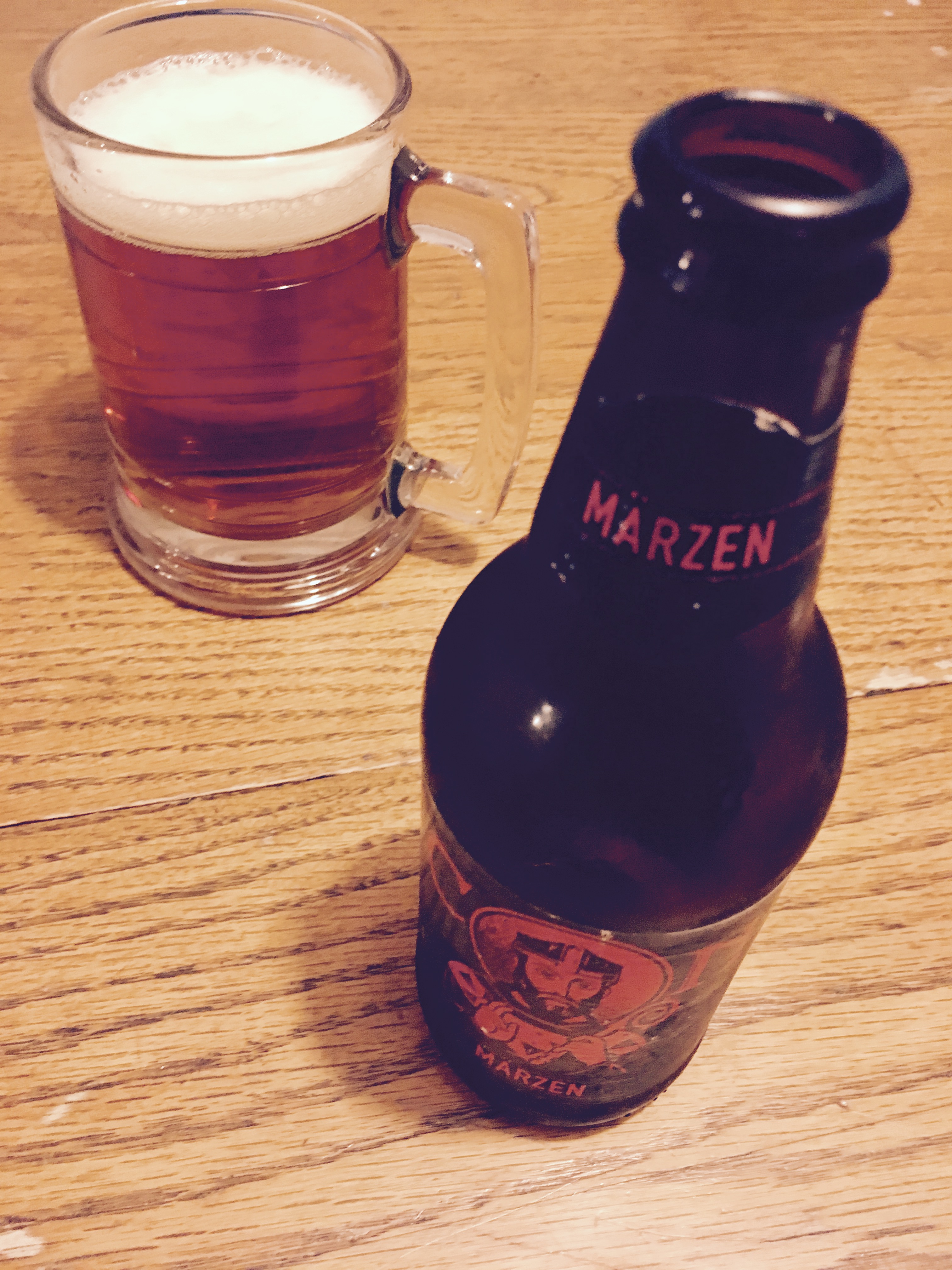 The Icon Red Märzen pours light amber in color, and a high level of aggression might reward you with some transient foam. But typically, don’t expect a lot of lasting head on this beer. No worries. Just enjoy the nose and move on. Aromas of toasted bread and nuts, with a touch of caramel sweetness can be wafted your way with the slightest swipe of your hand. Or just plunge your entire face right on in and enjoy the full effect. Your senses will relish the many layers of malt. But, a touch of floral hops can be sought-out by the most discerning of noses. Upon taking your initial sip, the first thing you notice is the superb mouthfeel. It is well rounded, refreshing, and fulfilling. And unlike many domestic versions, it won’t abandon your mouth to a super dry finish, forcing a lingering bitterness on your tastebuds. Instead, you want to dive right back in, ignoring the somewhat high (but standard for the style) 5.9% ABV that later could lead to a few questionable decisions; probably karaoke. This desire to hastily consume is further encouraged by the delicious flavors that match the nose’s tease: toasted malt, a light touch of caramel sweetness, and a complexity often abandoned by the quaffable intentions of milquetoast brewers everywhere.

The results of the arduous decoction method, and the commitment to quality ingredients and execution, separate the Saint Arnold Icon Red Märzen from many of the other domestic Märzens I’ve “enjoyed” to this point in my professional drinking career. I can’t recall a lager offering so much, while still remaining consistent and drinkable throughout the entire pour. Too often, beers of varying complexity can weigh on your palate’s loyalty like a good friend on a brutally long road trip; the first few sips may be great, but by the end of the pour you’re more than ready to move on. But with Saint Arnold Icon Red Märzen, you will almost certainly enjoy your experience throughout and plan your next endeavor upon completion (and it will likely be another Icon Red). It is undeniably a beer not to be missed.