As a kid, I remember playing a game where I’d take a coin and drop it into the pool and dive under the water to get it. Many of you probably played a similar game. As your confidence and abilities increased, you kept throwing that coin a little deeper every time. Maybe sometimes you couldn’t quite reach it before your lungs screamed for air and you would move back a little. Sometimes though, you’d surprise yourself with just how deep you could go.

This pretty much describes my path into the craft beer world, and it probably describes many of your paths, too. Oh, some of you may have taken your coin to the high dive and dropped it and dived as deep as you could, but I think for many it’s been more of an approach like mine: gradual, cautious, and rewarding. 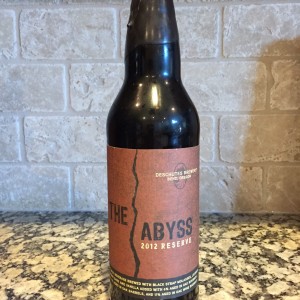 I’m talking about the bottom of the ocean, not this bottle, which is delicious.

The difference between that game in the pool and the craft beer world is that there doesn’t seem to be a bottom to this craft beer pool. In fact, it’s more like the ocean and the bottom is somewhere out there in the abyss (and I’m not talking about the bottom of a bottle of Deschutes The Abyss). The other day, my friend commented that I was fully in the deep end. It made me think about it for a bit. How deep have I gotten?  I trade with a friend in another state, but I’m not on any of the online trader groups. When I travel, I try to get to a brewery or two, but I haven’t done a trip just focused around beer (yet). I don’t homebrew.

On the other hand, I am on a first name basis with more than one beer manager in town. I have my plate on the wall at the Sugar Land Flying Saucer. I can’t imagine traveling some place and not bringing back a bottle or two. I don’t miss rare releases in the Houston area, and of course you’re reading my article on the Houston Beer Guide, so clearly, I’m pretty deep into it.

This all leads me to ask myself, how deep do I want to throw that coin? It’s a question I challenge you to think about for yourself, too. Maybe you haven’t even gotten out of the kiddie pool yet, drinking your Bud Lights, and you are happy about that. Perhaps you’re in the shallow end, picking up a six pack of something craft when you pop into the store. Maybe you’re a little deeper, and you pick up a bomber of something that looks interesting to you from time to time. Maybe you’re like me, or perhaps you’re similar to Sean Connery in The Hunt for Red October: fully bearded and driving his submarine into the abyss.

The one thing I do know is that the water feels fantastic. The craft beer world is changing like the waves, and I can see this being a choppy ride for some. I’d love to hear from others on what their place is in this beautiful ocean. As for me, I think I’m going to dive a hair deeper, and I hope to take you on that ride through my articles.

I think a better ending point for the article would be right after the comment on taking the readers on a ride through your journey through future articles. Removing the last few sentences would leave the article on a clearer note in my opinion. Other than that, it was a good article.