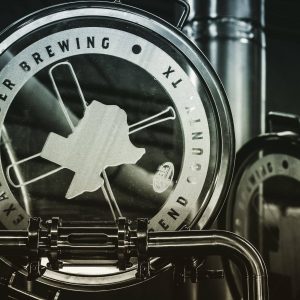 According to 2015 statistics from the Brewers Association, 75% of adults in the United States live within 10 miles of a brewery. I would guess that number is even higher in 2017. I, however, am in the minority. In fact, just about anyone living in Missouri City and large parts of Sugar Land are probably in that same minority; Running Walker is currently the only open brewery in Fort Bend County. (You can read our coverage on the closing-not-closing of Texian Brewing and the upcoming Fullbrook Ale Works here.) When I heard about Texas Leaguer Brewing and their future Missouri City plans, I was intrigued. I reached out to Nathan Rees, owner of Texas Leaguer Brewing, and found that he was not only a craft beer fanatic, he was also a neighbor. We quickly made plans to meet for a beer and to discuss the future of the brewery.

The new Texas Leaguer Brewing taproom and brewery is located in Missouri City in a 12,000 square foot warehouse on Pike Rd, just off of Gessner and east of the Stafford Center. It’s actually a pretty quick trip from the Galleria area down 59 for those living in town. Their 20 BBL brewing system will give them the capacity to sell beer in cans someday, but right now they’re focused on their tap room and local taps. The brewery will open to a warehouse setup with picnic tables, but they have hopes to open their 3,000 square foot indoor taproom in the spring of 2018, in line with baseball opening day. Nathan says he wants the brewery to be a place for people to come and watch the game or listen to live music. This is a brewery named with a baseball theme after all, and sports will be a big part of the marketing plans. Normal hours will be on Friday and Saturday to begin with, but you should expect it to also be open for most of the major sporting events. As for the live music, Nathan has been performing himself for years around town. He will be performing from time to time at the brewery, and his friends in the music industry are wanting to come play as soon as he’s up and running as well. 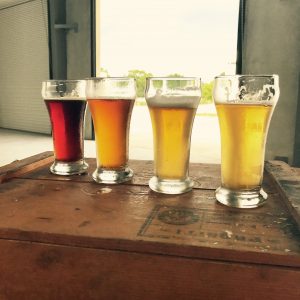 Texas Leaguer head brewer “Doc” Rebeck will have four year-round beers ready for their grand opening: 6-4-3 Belgian, 2 Hopper IPA, Knuckle Bock, and Airmail Blonde, all of which are named to go along with the baseball theme. I got to sample 6-4-3 Belgian and 2 Hopper IPA back in April. 6-4-3 is a Belgian pale ale that is heavy on the Belgian spices. It was this beer that stuck out to me that day, as it is very unique for the Houston area. Hazy golden with a nice foam head in appearance, the almost wit-like initial taste met with a clean finish, and it went down very quickly. The 2 Hopper IPA was still in development when I went to visit in April, but I got a sample from the brite tank during their soft opening on September 22nd. It is made with half El Dorado and half Cascade hops, and it’s then dry hopped with the same 50-50 combo. It has plenty of hop aroma, a soft melon taste, and very small bitter back end. I’m looking forward to getting a full pour to delve into it even further. Knuckle Bock and Airmail were available in full pours at their soft opening. Airmail is a golden blonde ale that got a lot of buzz from people I talked with throughout the night. Hitting you up front with flavors that remind me more of a pale ale than a blonde, it ends with more of a traditional blonde flavor. It is similar to some session IPAs that I’ve tried, but it still retains qualities of a blonde. The final beer of their initial beer offerings is Knuckle Bock, a traditional German style bock. I find it to be one of the best standard bocks I’ve had. To me, a good bock balances the malt flavors and aroma with sweetness, but not over the top sweetness. This one struck that balance for me, and I can see it pairing well with a good plate of BBQ.

Grand Opening is this weekend on September 29th and 30th. Located at 13503 Pike Rd, the brewery will be open from 4-8 on Friday and 11-5 on Saturday. Food trucks will be on site. Follow them on Twitter, Facebook, or on Instagram for more details.

Welcome to Missouri City Texas Leaguer Brewing, we’re very excited to have you!