October 8 marked Brash Brewing’s First Anniversary Party. The epic party seemed to have brought out every beer and metal nerd from across the city to Brashland bright and early Saturday afternoon. And rightly so, with exclusive merch teasers and exciting guest taps posted on social media since the tickets went on sale in early August. The event sold out in a little over a month, which you might want to keep in mind for their next anniversary party. Especially if it was anything like this one.

I got to Brashland just after noon and there was already a line of about 100 people or so, however it moved rather quickly thanks to multiple volunteers, including Brash owner Ben Fullelove himself, taking tickets and handing out tekus. The parking lot of Brashland was laid out with tents, food trucks, and a small stage. One of the tents held Brash tees, hats, and even undies, as well tickets for both additional tap pours and for bottles of Brash’s special one-year anniversary beer, Hammer Smashed Face.

Shortly after I arrived I got a chance to speak with Head Brewer, Vince Mandeville, who talked to me about Hammer Smashed Face and how it came about. Named after a Cannibal Corpse album, the original beer,  Vulgar Display of Power, was brewed last December and aged in Woodford Reserve barrels. It was then blended back with a second beer to add more depth. 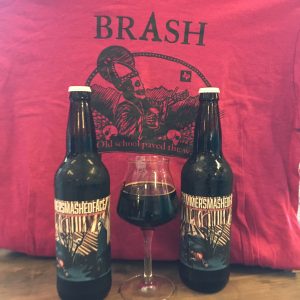 “I don’t like straight barrel-proofed beer, it comes off as really hot, and a lot of times, thin, that’s why we blend it back,” Vince said. “The beer we blended it with has some coffee and milk sugar lactose so it adds even more body.”

The barrel-aged Russian imperial stout delivered exactly on the expectations set by Vince. It was smooth, not too thin or boozy, with flavors of dark chocolate, slightly bitter coffee, and some vanilla, which was added during the blending process to help enhance the bourbon flavors. At an estimated 15% alcohol by volume, it was surprisingly easy to drink.

Although Hammer Smashed Face clung to the sides of my “pinky-out, motherfucker” mini-teku and held on for dear life, I eventually got around to having a few other beers: Milk the Venom with its chili and chocolate complexity and Abide, a sweet and creamy dessert of a beer. Both topped my favorites list of the event, despite stouts being a style of beer I rarely reach for these days.

The anniversary beer was available at both the indoor and the outdoor stations. The beer tent outside featured Brash Pussy Wagon, Cali Green, EZ-7, Abide, Black Meddle, and Milk the Venom. It also featured guest beers – The Bruery Mash & Vanilla, Southern Star Bombshell Blonde, and Ballast Point Double Dry Hopped Sculpin on cask. Heeding the multiple “pace yourself fool” signs posted around the tents proved a difficult feat. Inside, the bar featured the same Brash beers, along with Alesmith Vietnamese Speedway Stout, Saint Arnold Bishop’s Barrel 13 and Raspberry AF, and Stone Enjoy By 10/31/16.

Despite long queues of people at either beer station, the event was well organized. Lines built up fast, but subsided just as quickly. This gave patrons enough time to start a casual chat with a fellow beer nerd, but be able to get their beer before the conversation died with awkward silence. The pourers were fast and efficient, quick to ask if anyone in their sight was ready to be served. I never waited more than ten minutes. The distribution of 1200 bottles of Hammer Smashed Face was also well organized. The beer was held in a temperature-controlled trailer where ticket holders who purchased this tier could come and collect their bottles whenever they wanted. 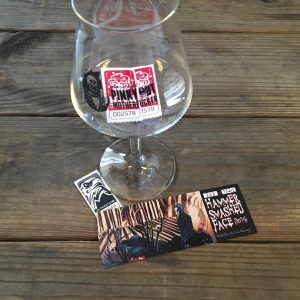 Walking around Brashland, I saw party-goers drawn to the stage outside where four local metal acts performed: Mr. Plow, Dirty Seeds, Funeral Horse, and Venomous Maximus. In between listening to bands and petting adorable puppies, one of which was named very aptly named Lemmy, I also got a chance to speak with brewer Robbie Cummings about the past year at Brash and what lies ahead for them. He highlighted the Fancy Sauce and Cortado releases as some of his favorite moments in the past year. When asked about where he sees Brash going in the next year, Robbie said Brash is striving for volume increase and heightened consistency. “All of our core beers we brew as much as possible just to try and get that consistent taste,” Robbie said.

Robbie also discussed an exciting upcoming collaboration with fellow metal-head brewery TRVE in Denver. “The deal is we will brew a beer here, and then we will brew a beer at their brewery. We are essentially pushing each other’s comfort limits; since we’ve never done a sour, they’re making us do one.” Sour beer fans in Houston should be excited for this collaboration which will be exclusively sold here. To close out our conversation, I asked Robbie to tell me what he wants Houston to say when they think of Brash and he said “I want them to know we work our asses off. We’re brewing beers that we want to drink, it just happens to fill a niche.” 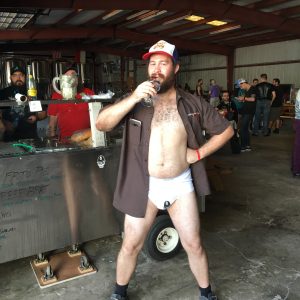 Overall, the vibe of the Brash Anniversary party was enjoyable, casual, and just the right amount of weird, perhaps best displayed by Justin Strait of Brews Brothers and Channing Herrin of Nobi Public House showing their support for the brewery by walking around in Brash-branded tighty whities.

It was in these little moments that I found myself having the best time. Not only is Brash a fun place to be, they recognize the devil is in the details, from ticket tiers to the day-of operations. A key component of which is truly understanding their capacity, not by cramming in as many people in as possible, but making sure all attendees were able enjoy themselves and not suffer through long lines or lack of personal space. For me, the small things add up, and yes, that means even the ripped-off gendered bathroom signage and the demagogue-stenciled commode. Being at the Brash’s first anniversary party felt good, and that’s not just the barrel-aged beer talking.

GABF 2016 Wrap-Up: What happened to Houston?

ABOUT THE AUTHOR Melissa Vega

Left-handed, bilingual, quirky & slightly nerdy Aquarian with a dry sense of humor. I collect vinyl records and have a deep appreciation for sci-fi movie soundtracks, great beer & pandas, baby elephants, puppies sleeping on their backs, all cute animals really... I write about music for both furry faces and not so furry faces over at beardedgentlemenmusic.com. I write about my adventures in beer drinking right here. I am either less cool or cooler than you think I am.