On September 1st, 2011 Karbach Brewing Company sold their first keg of beer. To commemorate the 5th anniversary of this event, they have released a new beer: Quintuple IPA. The “Quintuple” portion comes from the repeated use of the number “5” in the brewing process. Quintuple IPA is brewed with 5 different malts, 5 different hops (plus an extra dry hop addition), 5 different types of fermentable sugars, and 5 different yeast strains. 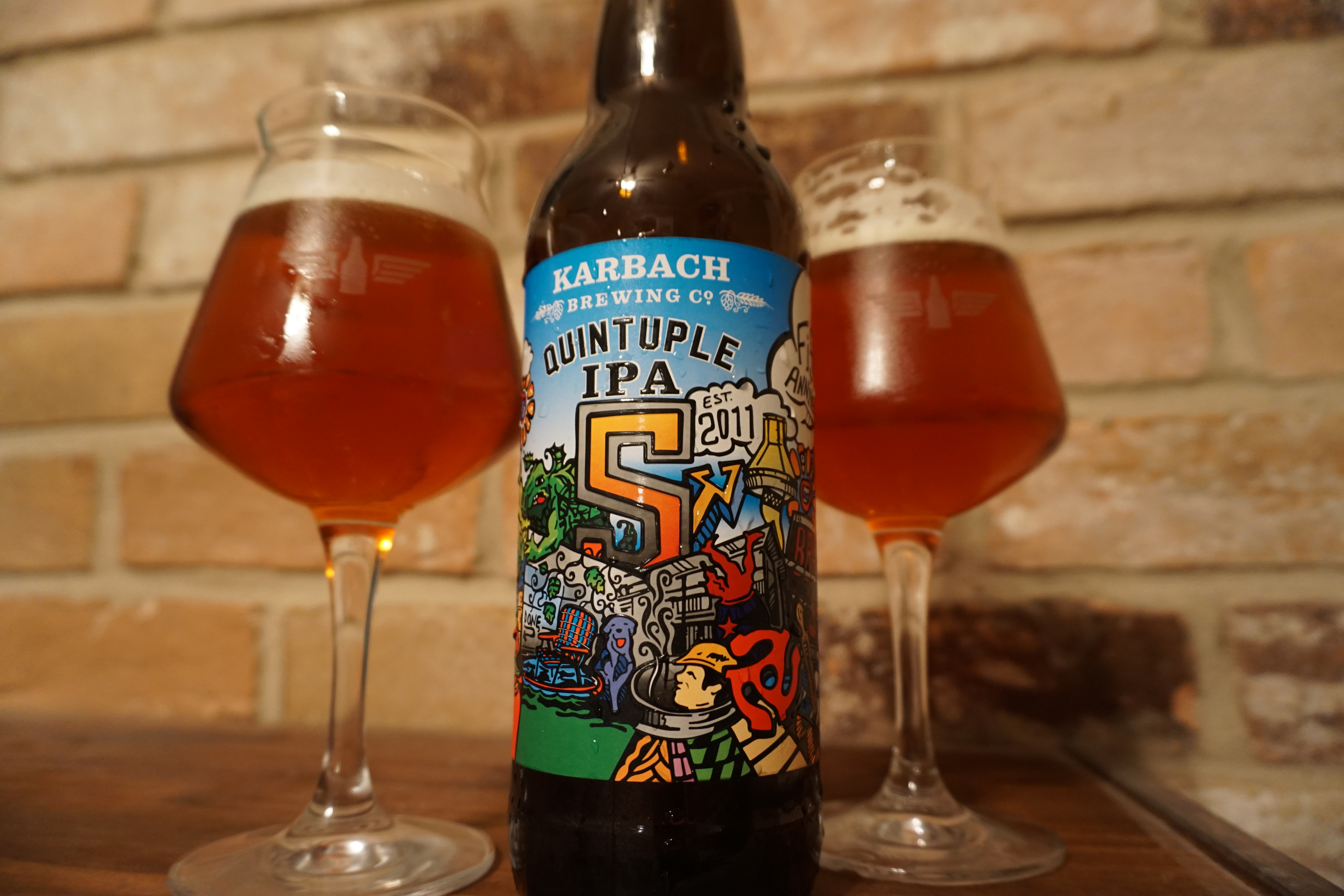 Fellow writer Chris White and I both tried this beer last night. Here are our condensed thoughts:

Josh: It opened with a louder than expected hiss. The first glass I poured was very foamy, the second not as much. The foam collapsed pretty quickly. I had to hurry to take the photo before it became a whisp. It’s very clear and copper colored; a little darker than I would expect.

Chris: It smells sweet and a little fruity. There’s a little citrus hop aroma somewhere in there, but the aroma is dominated with honey and some yeast esters. Don’t smell much alcohol for the ABV.

Josh: I cheated and looked up the flavor descriptors for the Vic Secret dry hop. It’s an Australian variety that can impart tropical fruit, pine, and herb flavors and aromas. I definitely get the pine.

Chris: It is initially quite sweet, with some tingly heat (maybe from the alcohol?). Some banana and apple flavors follow, then another hit of sweetness and breadiness. A sharp bitterness hits, and then a pretty short caramel flavor and alcoholic heat, and then a little more hop flavor. Quite quaffable for the size.

Josh: I think that’s right on. I let mine warm up a little too much and that sweetness took over and the hop bitterness started to take on an herbal quality. I couldn’t quite put my finger on it.

Chris: As it warms for me, the esters really take over. It’s sweet, almost Belgian, but with a pretty distracting bitterness.

Josh: Funny you should say Belgian. If I were handed this blind, I’d guess it was a Belgian Tripel blended with a Barleywine.

Chris: To me, it’s almost a hoppy Belgian Quad.

This is day-after Josh again. Overall, I think calling this a Quintuple IPA is gimmicky. There are several beers fighting for dominance, and none of them are an IPA. An IPA by any definition should be hop forward. If you’re going to call a beer “Quintuple IPA” it should reach out of the glass and smack you in the face with hops. If this beer were called “5th Anniversary Belgian Barleywine” I think I would be more enthusiastic. I do this think beer will get better with age as the hop bitterness it does have fades and the flavors have time to mellow and meld. But I’m personally not buying any to age.

New Beer Cans and Bottles All Over Houston