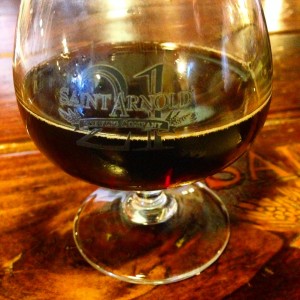 Last year, in a celebration of 20 years of business, Saint Arnold held a special “cellar event” that included special beers that were new, rare, or created for that event alone. It was marvelous, and a really nice way to celebrate two decades of craft beer in Houston.

This year, Saint Arnold decided to hold the event again, this time celebrating 21 years, and did so in a marvelous fashion, not at all as sloppy as most of us celebrated 21. The event once again held beers that hadn’t been seen in some time, beers that were yet to be publicly released, and beers that wouldn’t be seen outside of the event. And once again, cheese from the Houston Dairymaids was provided.

Highlights included a Cognac Barrel Aged 20th Anniversary Ale (a year and some cognac later turned this into an extremely complex beer), the Bourbon Barrel Aged Divine Reserve 12 (Quad) that they also had at last year’s party (just phenomenal), and Bishop’s Barrel 2 with Brett, a beer that most around me agreed is one of the best the brewery has ever made.

Some of the more interesting beers that were available included a cask of Pumpkinator with Coffee and Cocoa (the coffee dominated, and the spice – evident in both the Bishop’s Barrel 9, Pumpkinator 2014, and to a lesser extent, Pumpkinator 2011 – was almost non-existent), Divine Reserve 11 (a once proud and mighty beer is no longer very drinkable – the fresh Endeavour on tap nearby was a strong reminder of how amazing DR11 once was), and two different syrups for Boiler Room (The blackberry was my preference – though I generally drink Boiler Room straight and in large quantities, sometimes I enjoy it mit schuss.)

It’s crazy to think that Saint Arnold is 21 years old today. All around the room on Sunday stood workers, volunteers, friends, and family of the oldest craft brewery in Texas. There was a buzz in the air, not just because of exciting beers and tasty cheeses, but because in many ways, this celebration wasn’t just about the brewery – it was about craft beer in Texas, in Houston, altogether. In 1994, when Saint Arnold opened, when the first sip of Amber poured, no one could have predicted how mature the beer scene in Texas would get over the next 21 years. And now, we’re all very thirsty – it’s time to enter Houston beer adulthood.

Congratulations to Saint Arnold, godfather of Texas Craft Beer. Here’s to 21 years, and here’s to many, many more.