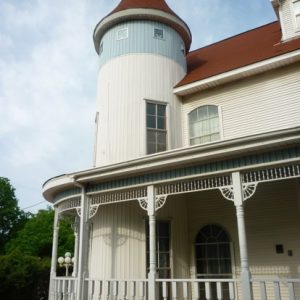 On Thursday night I attended a preview of the much anticipated City Acre Brewing Co., a brewpub located about 10 minutes north of downtown off U.S. 59 at 3418 Topping Street. Originally slated to open four years ago, but delayed due to complex city regulations and beer laws, City Acre will hold its long-awaited grand opening on July 7.

Offering intriguing food and drink menus, eclectic background music and charmingly eccentric decor, there truly is something for everyone at City Acre.

Veteran homebrewer Matt Schlabach and his wife, Meredith Borders, purchased the nearly one-acre parcel of land off the Eastex Freeway in 2009, and had hoped to open a brewpub on the property in 2012. While waiting on permit approvals and facing construction interruptions, the space, which features an expansive garden and fantastical, gargoyle-guarded, Victorian-style “castle,” has served as a special event venue and de facto tasting lab.

The stalled progress of the brewpub had one advantage: it allowed time for perfecting beer recipes. Some took longer than others to get right. While the Sneaky Wheat Stout was a hit right out of the gate a year and a half ago, Matt says he test batched more than 30 IPAs before arriving on the final Bayouwulf base. 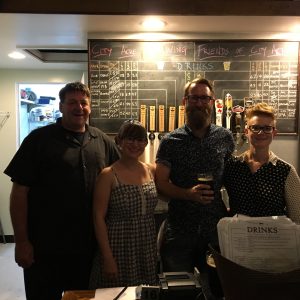 The extended wait also allowed for other, unexpected benefits, according to Matt. “It definitely gave [us] a chance to hone our vision,” he said. “When you’re doing nothing but thinking all day, you can really focus on what you want.”

This mindset definitely shows. The City Acre crew has created a unique, intimate place for beer geeks, foodies, friends and families to share their diverse tastes and discover new ones.

The extra time also allowed the garden to grow. City Acre now has 57 fruit-bearing plants grown with organic methods on the property. The brewpub not only highlights these ingredients in their food and drink, they make the ingredients the stars. “It’s very important to us to make something that showcases our fruits and vegetables,” Matt said.

A former mechanical engineer, Owner Matt has had his hand in nearly everything related to City Acre. Not only is he the brewmaster, he designed their logo, built some of the taproom’s light fixtures and bakes all the brewpub’s bread and buns.

Co-owner Meredith, a magazine editor by trade, is City Acre’s social media guru, as well as their menu and website copywriter.

A long-time friend of Matt’s, General Manager and Fermentologist Mandy Jeronimus, brings fervor for brewing and soda-making to the team. Mandy’s love of all things carbonated comes naturally: her grandfather was a soda jerk and her entire family homebrews.

Rick Kelsay, a Pacific Northwest native, answered Matt’s ad for a chef, and they immediately clicked. “It worked out better than I could have expected,” Matt said. “We came from a common idea of executing solid and simple first, then go from there. “Their shared background of mechanical engineering made Matt and Rick logical partners. “We work together to tweak recipes,” Matt said.

The result of the City Acre team’s hard work pays off in their four beers, inventive food and non-alcoholic drink menus.

The sublimely savory German Burger, a pork and venison patty topped with Swiss cheese, sauerkraut, house-made pickles and mustard, caramelized onions, and apple on a freshly baked bun crowned with toasted onion paired well with the Hitchcock Blonde. The burger reminded me of pork “sauerkraut supper,” a family recipe and childhood favorite of mine, which my mom always served accompanied by a baked apple.

City Acre offers a sweet finish to your meal with the brewpub’s own seasonal ice creams or house-baked cookies. Their blueberry sherbet was so good I almost forgot about how great the beer was after I tasted a spoonful of the creamy concoction. Not overly sweet like some sherbets, the bright burst of onsite-grown blueberries shined in this beautiful dessert.

Another distinctive characteristic of City Acre is their creative non-alcoholic menu, which is composed of a custom mineral water blend, house cold-brew coffee (served on nitro), and small-batch sodas crafted with pure cane sugar and homegrown seasonal fruits and herbs. I recommend the wonderfully frothy and refreshing hibiscus mint soda made with mint harvested from their onsite garden.

I walked in City Acre’s taproom as a mere email acquaintance, and left feeling like I had made new friends. Do yourself a favor and check out City Acre–I think you’ll feel right at home, too.

Shining a spotlight on Under the Radar