Flood Independent Distribution recently added Fort Collins, Colorado based Funkwerks to their portfolio. Founded in 2011, Funkwerks quickly made a name for themselves, winning 3 gold medals in 3 years at the Great American Beer Festival (GABF) as well as winning Small Brewery of the Year in 2012. Going back even further, their flagship Saison was based on co-founder Gordon Schuck’s homebrew recipe, which won gold at the 2007 National Homebrew Competition. 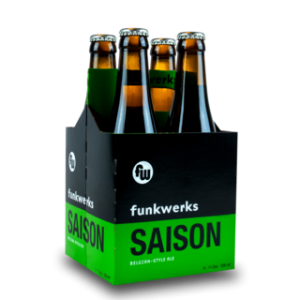 From Flood: “We’re representing the brewery in Houston, Austin and San Antonio, starting with a small shipment of Saison and Tropic King kegs pouring at select bars and restaurants. In early July, we’ll have a full-scale launch with draft and 4pk bottles of Saison, Tropic King, Nelson Sauvin and Raspberry Provincial, as well as launch events with the Funkwerks crew featuring some really limited items. Keep an eye out here for more details on these upcoming events!”

Later in July, you should be able to find four-packs in the same places you find Jester King and Jolly Pumpkin. Keep an eye out for specialty beers bottled in 750mL bottles, which are also coming soon. According to Flood, four-packs should be in the $9.99 to $10.99 range, although the final price is set by the retailer and will likely vary.

On a personal note, this is incredibly exciting. I’ve been preaching that Houston needs more saisons since day one of Houston Beer Guide. Funkwerks Saison is a very dry and crisp saison perfect for the heat and humidity of Houston. Bottles of Funkwerks Saison have always been a gem at bottle shares, and I was fortunate enough to try the first (and up until recently, I think, the only) kegs of Funkwerks Saison, Tropic King, and Deceit to be available in Houston at the 2015 Houston Funk Fest. All three ranked among my top beers of the festival, and there was some very tough competition. As you may be aware, Funkwerks has already been available in the DFW area for about a year and a half under Andrews Distributing, so seeing Funkwerks expand statewide says a lot about the thirst in the Houston market and the impression being made by independent distributors like Flood.