The unlikely duo of Justin Gyorfi, a urologist from Clear Lake, and Mike Broderick, an award-winning Pennsylvanian home brewer and former IT professional, have faced some formidable obstacles to opening Ingenious since we began reporting on the brewery’s progress in February 2017. The business partners weathered construction hurdles, Hurricane Harvey, and shortly after Harvey’s devastation, Justin’s first child was born, and Mike suffered a ruptured appendix on the same day. 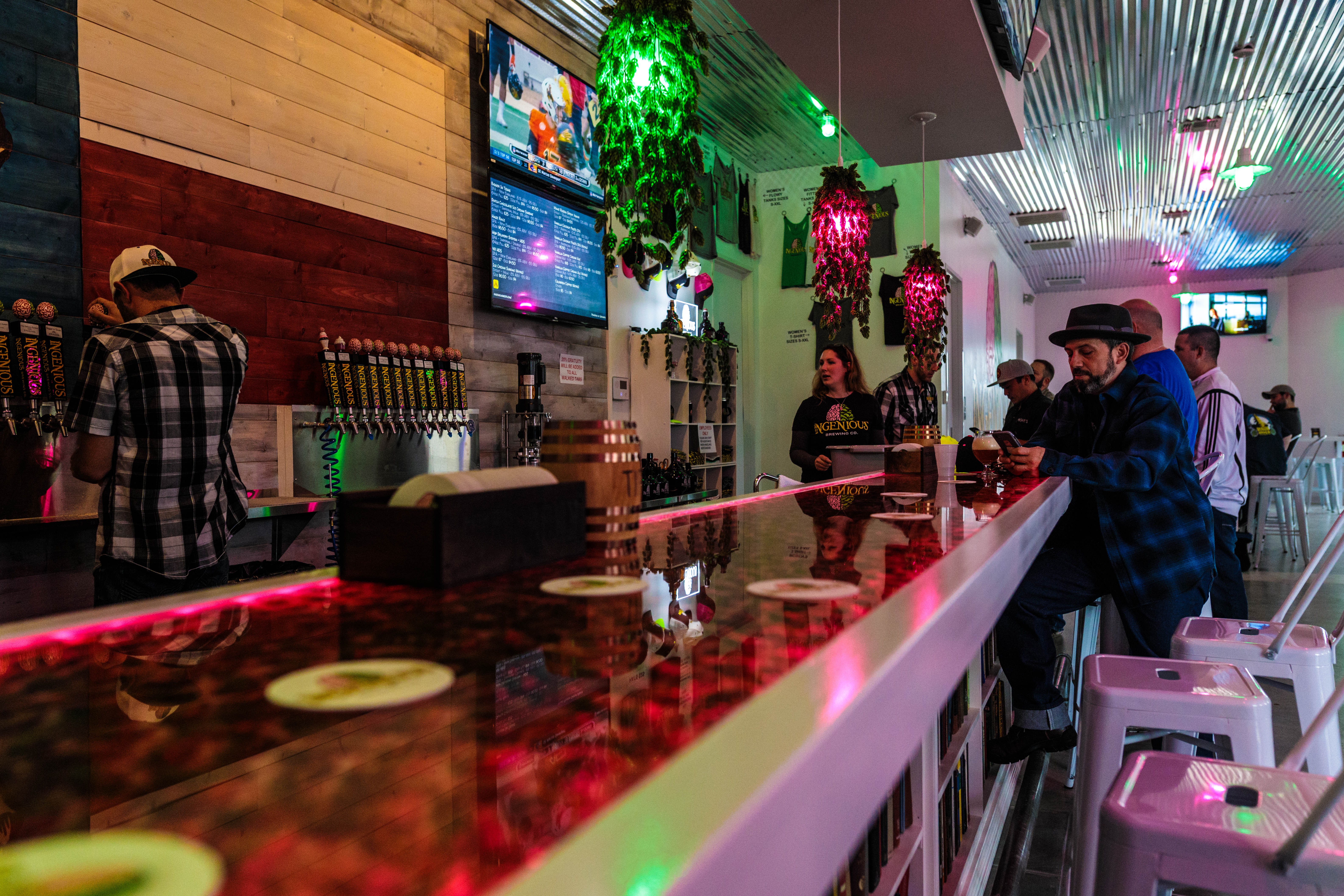 During the delays, venues around the Houston area from Webster to Katy hosted events showcasing Ingenious brews. Justin said he is thankful for the support of these establishments, including Craft Beer Cellar downtown and Humble’s the Hop Stop, who were among the first locations around town to receive kegs and are currently serving Ingenious beers on tap.

A passion for craft beer, particularly IPAs and stouts, bonded Justin and Mike, who met when Justin was doing his residency at Hershey Medical Center in Pennsylvania. The two formed a plan to open a brewery, and in 2014 Mike sold everything he had and moved to Houston.

“We are trying to bring in elements from breweries around the country that we admire, then combine that with our own thoughts and ideas to create a distinct Ingenious experience here in Houston,” Mike said.

They have succeeded in creating a unique atmosphere with a very smart-looking bookcase bar and a wide array of brews, heavy on New England IPAs inspired by Tree House and Trillium, and complex stouts in the vein of Cigar City, one of Mike’s favorite breweries. A fan of Tired Hands’ milkshake IPAs, Mike also brews his own twist on lactose IPAs, FroYo beers.

Though the taps rotate often, Ingenious has a few beers that have consistently been on the menu. I tried the creamy Vanilla Coconut FroYo IPA, which features a vanilla aroma, subtle coconut flavor and light bitterness. My favorite beer was the Bigger in Texas New England IPA, an imperial version of their Made in Texas IPA. It is juicy, a little floral and has a velvety soft mouthfeel.

I also enjoyed the stouts I tasted, particularly the rum barrel-aged ones. All of them were well-balanced and very smooth. With no heavy booziness, they went down very easily – a little too easily for me as most of them ranged from 11-13% ABV.

Mike said he feels Ingenious’ variety of styles sets their beers apart from other Houston-area breweries. I agree. In addition to the IPAs and stouts, in their short existence Ingenious has also produced brown, cream, English mild, amber and wheat ales. I tried the Vanilla Coffee Cream Ale, which has a delicious candy nose. Heavy vanilla at first sip, the beer finishes with a slight coffee flavor. 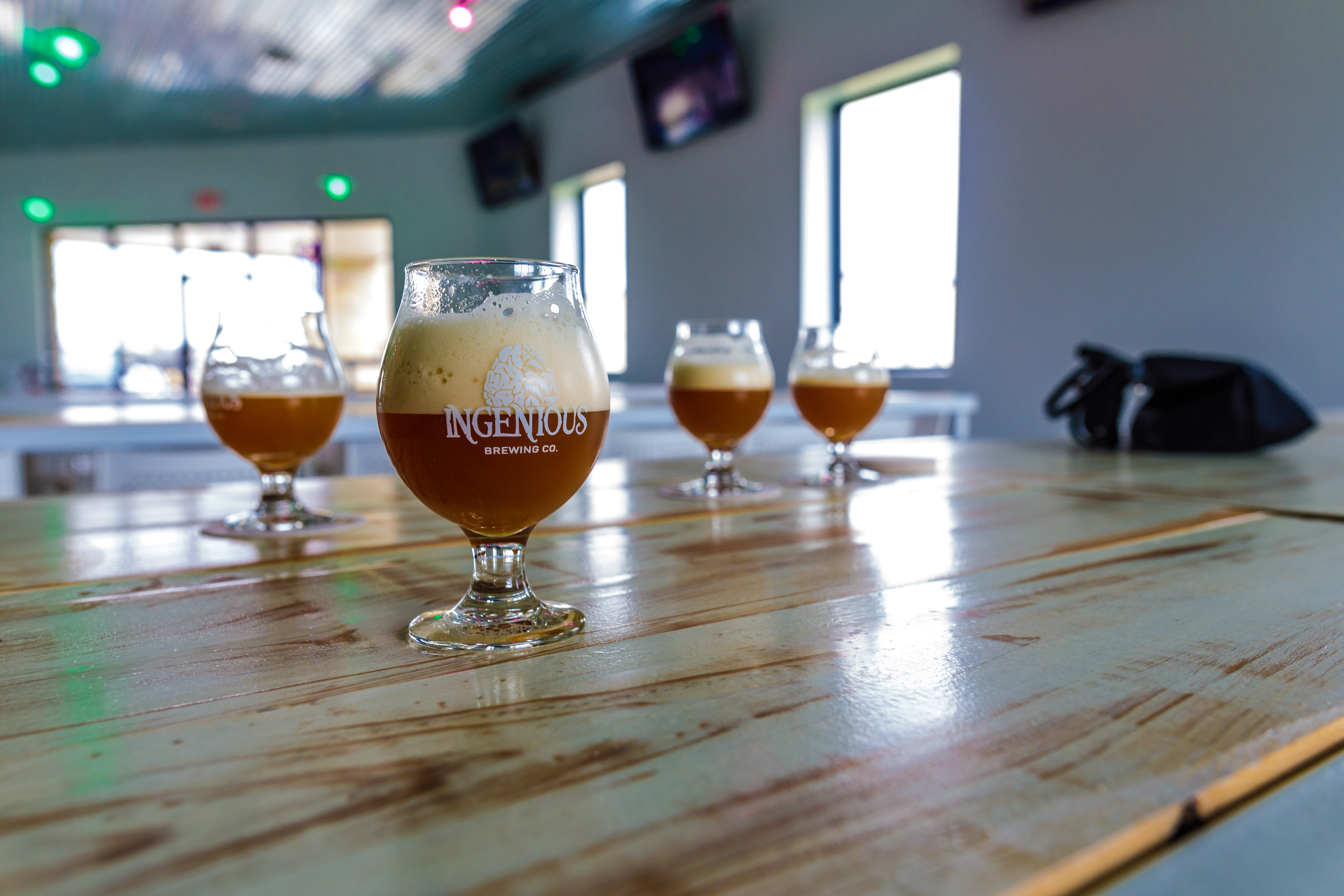 Additionally, Ingenious will soon offer ¼ lb. hot dogs on a fresh bakery roll, chips, and sodas, which patrons can enjoy inside, or on its kid- and dog-friendly patio. Outside food and food delivery to the brewery are also allowed.

On Mondays, Ingenious will offer full pours of many of their beers at half-pour prices. Thirsty visitors can take home brews in growlers or crowlers. The brewery recently began canning and plans to have fresh four-packs offered monthly.

The prolific brewery has scheduled releases of one to three new brews a week, one of which will typically be a barrel-aged offering. This constant variety should ensure patrons have the distinctive Ingenious experience that its founders desire.

“Each time a patron comes to the brewery, we would like to give them a unique beer drinking episode,” Mike said. “We want to give people a reason to come back again and again.”

Hours: (as of the publishing date)

Photographer Shawn McDermott is an IT engineer born and raised in Minneapolis, Minnesota. He has been into photography for over a decade and loves traveling the world trying new beers!