NOLA Brewing is delivering on the hype with a full slate of launch events in the Houston area next week.

The party is officially getting started at Flying Saucer Monday evening. NOLA will have several of their flagship beers, as well as Piety, a sour beer aged in red wine barrels with tart cherries. Since it’s a Monday at Flying Saucer, all draft beers are $3, giving you the opportunity to check out NOLA’s range of beers without breaking the bank. Central Market is setting up their NOLA display Monday, and a demo tasting will follow Tuesday. For our College Station beer loving friends, West End Elixir Company will have a mix of Funk Series and IPAs on draft. I recently drank the Out Tequil-Ya tequila barrel aged sour at the brewery and I can assure you that their offerings are legit. 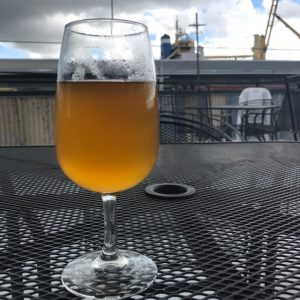 Tuesday will feature a tap takeover at Moon Tower Inn. Funk Series kegs will be served along with a special on the Coonass dog with the purchase of a NOLA pint. The Louisiana spirit will be running strong at the East End staple.

For the Southsiders, Flood Independent Distribution is putting on a pub crawl around 4 NASA area bars featuring every beer NOLA is sending to Houston. The party starts at J. Henry’s Draught House at 4:30 PM, moves to Beers Looking at You at 6 PM, heads to Nobi Public House at 7:30 PM, and wraps up at the “OG” Nobi Asian Grill from 9 PM to 10:30 PM. The first 12 people to get their cards punched at all 4 stops will have an opportunity to purchase a batch #1 bottle of Desire, a raspberry sour ale. Only 5 cases of this beer made it to Texas. (Click here for more details, including the taplist at each stop.)

Wednesday brings a slew of events throughout the city. Downtown Flying Saucer will be having another event, this time offering flights of NOLA’s finest, including releases from their Funk Series. Flying Saucer Sugar Land is debuting 5 of NOLA’s beers on their Elvis Glass night. Drink of Ages is featuring NOLA on their radio show starting at 7 PM, and will also be serving their lineup of liquid offerings.

On Thursday, The Hop Stop will be releasing NOLA’s brews, including a case of the limited release Desire raspberry sour ale.

Representatives from the brewery – Dylan Lintern (COO), Derek Lintern (Director of Funk), and Ryan Veuthey (Brand Manager) – will be in town this week to share their love and knowledge of NOLA’s beers. They are not holding anything back from the Houston market, and this week of launch events shows their commitment to our beer scene. Kirk Coco, Owner / CEO of NOLA says, “We are excited to bring a little NOLA Funk to the Texas market!” Let’s return that love with a solid showing at these events and a full sampling of their offerings. I promise you won’t be disappointed.

ABOUT THE AUTHOR Britt Antley

Britt is a native Texan, lived in Houston for 12 years, and is loving life in the Big Easy (although his liver is not as happy). His liver is also not nearly as proud of his 8600+ Untappd uniques as he is. Stupid liver. He loves flavorful complex beers from juicy IPAs to fruited sours to barrel aged stouts, and he has vowed to some day be buried with a 4-pack of Yellow Rose. Follow his beerventures on brittskibeers.com.