Karbach F.U.N. 013, aka Kentucky Habit, is delicious and you should absolutely drink it. But it’s only half the beer you’re expecting.

“Kentucky Habit is brewed with a blend of specialty malts and cane sugar. We used a Trappist yeast for fermentation which lends some spicy, phenolic notes to hints of fig, caramel and raisin. This brew was aged in 72% Old Fitzgerald barrels and 28% Four Roses barrels. The aging process imparts some great toasted, vanilla oak character as well as a discernible bourbon flavor.” 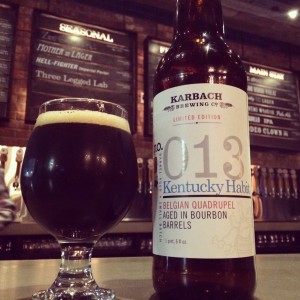 He’s about half right. There’s a lot of flavor here. Toasted, vanilla oak? Check. Sugary sweetness? Check. Discernible bourbon flavor? For days. This really is quite delicious. It’s undoubtedly a must-try for anyone who likes bourbon-barrel-aged beers. I do, and I had a hard time putting it down, even despite the hefty (and noticeable) 11.9% abv.

But where’s the quad? There’s nothing spicy/phenolic to be found. Dark fruit? Maybe — but not in the typical, estery quad/Belgian Strong Dark Ale kinda way. In fact, it’s very one-note. Now, it’s hard to complain when that one note tastes so good, but still: there’s nothing complex about this beer. It’s a dark, sweet, boozy bourbon bomb.

I don’t think I’m asking too much of Kentucky Habit. After all, a spectacular BBA quad, Boulevard Bourbon Barrel Quad, sits on Houston shelves year-round. (It also ages quite interestingly, for the record — the cherries gain prominence after a couple of years, giving it a really nice “imperial oud bruin” twist. I know I’m the #DrinkNow guy, but this one’s worth a shot.) And if you ever see Deschutes Not The Stoic return, buy it all — it’s one of my favorite releases from the last couple of years, and it absolutely nails the bourbon/quad mix.

Back to Karbach’s version. It reminds me a lot of their prior F.U.N. release, 012, aka Trigave. That was a Belgian-style tripel brewed with agave and aged in tequila barrels. It, too, was very tasty — with tons of tequila and barrel flavors, but no sign at all of the tripel. I enjoyed the beer and drank it more than once, but still found myself annoyed by it. If they’d called it a “tequila-barrel-aged agave golden ale”, I would’ve had no complaints. But I adore the classic Belgian styles, and if you call something a tripel, I want at least a hint of a tripel. Trigave had none.

Same goes for Kentucky Habit — I never found any quad. I easily and happily drank the whole bomber, too. So, go buy this. I know it’s limited, but I’m guessing there’s enough out there that you’ll be able to find it with a little bit of effort. I can just about guarantee that you’ll like it — as long as you’re OK with a delicious bourbon-barrel-aged dark ale, and you’re not expecting a quad.

You Should Be Drinking Texas Beer Refinery