On Monday, August 15th, No Label, Calhoun’s Rooftop Bar & Grill and Brewheart apparel will soft-launch ‘Brew of H’, a (Cougar) Red IPA that’s been two years in the making. I had a chance to talk about the beer and the collaborative story behind it with Shannon Parker, Owner and Designer at Brewheart apparel, as well as Gus Vincenti, Sales Manager at No Label Brewing Company.

Sometimes good beer starts with nothing more than a good idea, and Brew of H fits into that category. When Calhoun’s opened on the south end of the University of Houston main campus in August of 2014, their friends at Brewheart collaborated with them on a design for T-shirt that clearly communicates that University of Houston Cougars need good beer too — with a hand holding a longneck while simultaneously making the Cougar Paw hand sign.

The design that started it all!

At the time, the only UH-themed beer available was red-dyed Bud Light available on draft at Cougar football home games. However, late in 2015 the Coogs at No Label Brewing approached Calhoun’s/Brewheart to use the name for a red-dyed version of First Street Ale to be sold in the run-up to the Cougars’ victorious trip to the 2016 Peach Bowl. That beer was such a hit — it sold out in a couple hours at Calhoun’s — that the idea for a true collaboration craft beer was cemented.

Over a few recipe formulation sessions and some test batches at No Label’s brewery in Katy the beer was finalized into a (very) Red IPA, hopped gratuitously in the boil with Cascade, Columbus and Nugget and dry hopped with the same combination. Shannon told Houston Beer Guide that she loves Cascade and that type of west-coast IPA, so this beer is a hop forward tribute to the style of beer, and it doesn’t use a drop of red food coloring — getting all its Shasta-pleasing scarlet luster from specialty barley malt. Gus said that the beer was more on the dank and earthy side than other No Label hoppy beers, but at 6% still aims at being balanced and in line with No Label’s approachable style. He said that Jennifer and Brian Royo, the owners of No Label and proud UH alums, wanted to brew something that would be not be a ‘gimmicky’ beer. They want to be true to the flavor, and took great pride in crafting this beer in the spirit of alma mater. 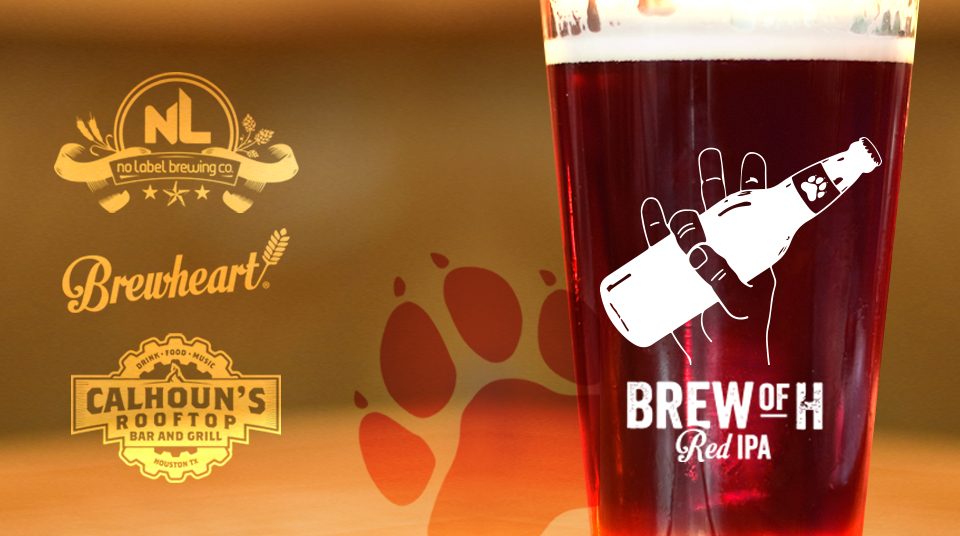 The soft launch at Calhoun’s on the 15th of August will be a ticketed ‘friends and family’ event, and What’s On Tap Radio will be there to document the festivities. A broader launch including distribution to multiple bars and restaurants in greater Houston will follow in the weeks to come.

The beer is currently planned as draft-only, and as No Label (through their distribution partner, Favorite Brands) does not have access to taps at TDECU Stadium it won’t be available for Cougar home games this season, so fill those growlers for your tailgate coolers! A packaged version could be available soon, and Gus said this beer could join No Label’s year round lineup, with draft distributed to accounts popular with UH alumni across No Label’s existing statewide Texas footprint.

But for now, it’s no surprise that it took a collaborative effort between some good beer people and some proud Houston Cougars to (finally) make a UH-themed brew. This season Cougar fans can add a new refrain to the traditional fight song – DrinkItUp, DrinkItUp, Go, Coogs, Go!!