Divine Reserve 16 – A review and commentary

Nothing seems to get the Houston beer community more engaged and interested than a Divine Reserve release. Searching out DR on release day is, in my judgment, a rite of passage for the greater Houston beer community. Whether that’s standing in line outside a local beer store of choice, whispering a secret password to a supermarket beer manager, or otherwise putting hands on a share of the sort-of-annual release of this ever-changing elixir, DR is as much social beer phenomenon as it is simple exercise in beer sales. 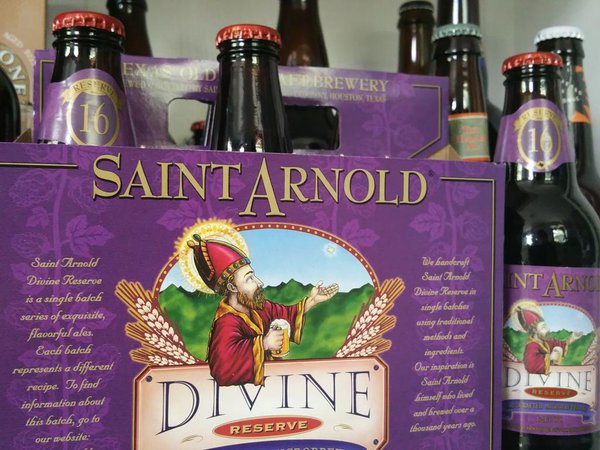 As much as “DR Day” and the hullabaloo that surrounds each one has become a part of the DNA of the Houston beer community, a similar type of recurring pattern emerges with the immediate reaction to the beer itself. No matter the style, reactions seem almost always binary: love or hate. Twitter, Facebook, Reddit, Untappd… they all fill with opposing reactions.

Nothing reinforced this for me as much as my own attempt to get the latest release — the 16th in the series — for this review. As I was traveling for work on release day, I came back to town and just couldn’t find it in my usual hunting locations in the Clear Lake area. Quick discussions with Houston Beer Guide friends and social media helped me get on some, but not before I was bombarded with the same type of messages — and I’m paraphrasing here to protect the guilty:

“I’ll give you some just to get the stuff out of my house.”

“Already into my second one tonight! Delicious! Can’t wait to get more!”

So was there something unique about this 10% alcohol by volume Adambier that inspired this type of reaction, or is this just the typical DR release dynamic? My opinion, after enjoying 12 oz of the beer over a few hours of a lazy evening, is that it’s a little bit of both.

First off, if you’re like me, the only experience you’ve had with Adambier has been a taste or three of one of the more famous examples from the US craft brewing scene — Adam from Hair of the Dog in Portland. Quite honestly, my tastes of that beer came at shares or festivals, and so my own knowledge and memory of even this is limited at best. I knew it was a smoked beer based on a style from northern Germany, an ale (vs. the smoked lagers from Schlenkerla I am more familiar with) and one of the seemingly unending sub-styles and sub-sub-styles of beers that are being revived from this beer-rich region of north-central Europe.

That’s a long way of saying that I’m ignorant to this style and how it “should” taste. So the description from the Saint Arnold page is about all I had to go on. Does that matter? I’ll come back to that in a following post along with some Q&A I had with the brewery on my own reactions to the beer.

So, to the pour! Beer came out of the fridge at, by my estimate, about 40F, as I’d put a room temperature bottle in for a few hours. I poured about 8 oz into a shaker pint and let the rest stay in the cold bottle. The beer itself was a deep dark brown with a ruby tone when held to the light. Pretty. Looks quite a lot like a robust porter, albeit with limited head retention. The slightly taupe-colored foam dropped away fast, and there was little to no evidence of CO2 releasing after that initial pour.

I could smell the smoke from the neck of the bottle and just more than a hint on the nose of the beer in the pint. Just a little bit of a peppery aroma — I’m guessing from the hops. Not a trace of yeast esters or phenolic elements (fruit, clove, that type of thing).

The first sip was pretty smoky, but that flavor was replaced with a bracingly bitter hoppiness and these two alternated a bit, slowly giving way to a long malty finish that was sweeter than it was roasty or caramelly. The smoky, bitter, and malty flavors echoed on each other for at least a minute. A complex beer for sure with a lot going on. As I got a little deeper into the beer and as it warmed, I really began to notice the smoke flavor building. With that came a slight astringency, I think from that same smoke. On the first sip I didn’t notice it, but on the second I started to perceive it: first on the back of my soft palate and eventually (with more sips) across the whole roof of my mouth. This wasn’t unpleasant, but it wasn’t as enjoyable as the nice malty finish either, and it became a major part of how I was experiencing the beer. The hop bitterness and a slightly fruity finish that emerged as it warmed were interesting elements too. I didn’t notice any of the alcohol.

My bottom line is that this beer is incredibly interesting to drink and got me thinking about all these components as I drank it — smokiness, maltiness, bitterness, astringency — but I couldn’t reconcile all those elements into a single taste profile. The beer just isn’t the sum of its very interesting parts for me. Yet.

Why yet? This DR reminded me quite a lot of DR8, a Scotch Ale/Wee Heavy. I found that beer hard to drink on release. As I remember, (it was in 2009) it inspired the same type of endpoint-style like/hate reaction among the beer community at large. It was a smoky beer. And it’s continued to get better year after year; in fact, it’s probably my second favorite Divine Reserve release ever. Lots of my friends gave me their then-5-packs of DR8 with a scowl on their face: “Yuck, you can have this gross stuff!” (again, I paraphrase). Thanks, great friends!

So is this a good Adambier? Is it a good DR release? If you like to drink interesting beers that are unlike anything you’ve probably had before, find some. If you want a beer that will probably get more incredible with age as the component parts come together, find some. Do you absolutely, positively want to #DrinkNow? Share it. 4 oz would have been enough for me: that’s about where the astringency began to build up and become a little distracting. I’ll definitely be opening one of these every 6 months for the next couple years.

This DR fulfills the expectation for the series. Challenging for the drinker. Interesting as a standalone beer. Probably will age very well. DR is part of Houston beer culture, and this release is a worthy add to that list.

This is why we can't have nice things.