Editor’s Note: This article is written by Joey Williams, the Beer Department Manager of Spec’s of the “downtown” location on Smith Street. As he describes below, he offered to lead us in a tasting of Texas(ish) pilsners and we happily took him up on it. At the tasting were Houston Beer Guide writers Josh, Jeff, Katie, Cody, Alice, Chris, Colleen and “friend of the show” Patrick. 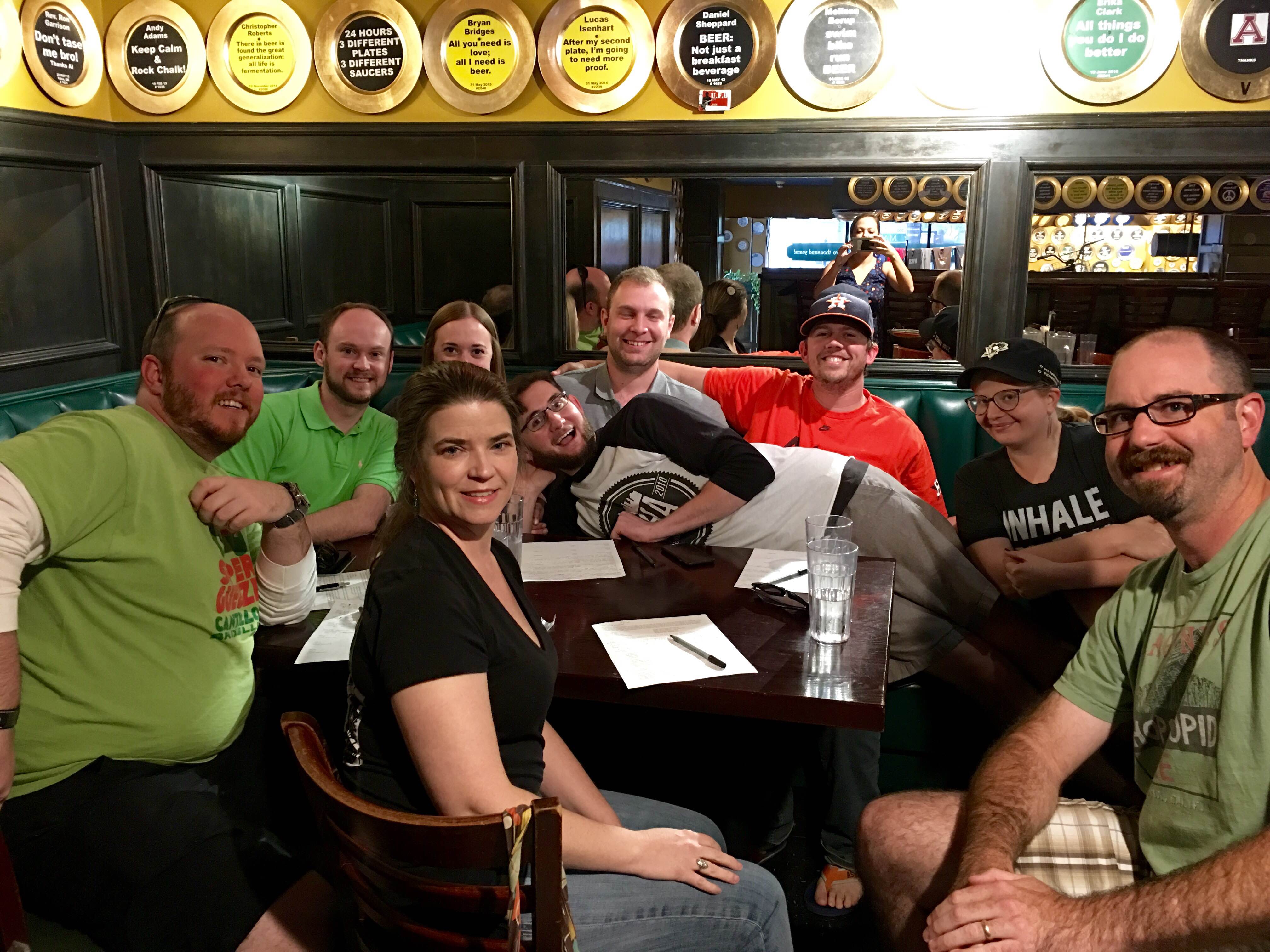 The Judging Panel, a few beers in

Pilsners are a style that don’t get the love and appreciation that they should. A well-brewed, well-executed pilsner at any time of the day or year, especially outside in the heat, is hard to beat. Texas, being hot ¾ of the year and a land of outdoor things, is prime pilsner country. Add to that, the history of German and Czech immigrants and the influence of their culture on our Gulf Coast melting pot and you have a region in need of all of the pilsner we can find. What has been found, up until recently, has been from somewhere “out there,” beyond our state borders. With the craft beer boom, times have changed and we now have enough examples of fine pilsners to talk about.

When I heard that Saint Arnold was going to bring that BEAUTIFUL unfiltered, unpasteurized, dry-hopped Czech (Bohemian) Pilsner that they had done previously as an Icon Red, I knew this would be the season for pilsners in Texas. Add to that Southern Star introducing a Spring Pilsner at nearly the same time, Oskar Blues opening a brewery in Austin, making Mama’s Little Yella Pils a TX beer, Live Oak FINALLY packaging and Spec’s bringing in Austin Beerworks Pearl Snap for TX Beer Month (plug, plug)… a tasting had to happen.

I approached Jeff and Josh about the idea of a blind side-by-side tasting of all of the packaged TX brewed pilsners we could get our hands on. They, and a handful of the writers at Houston Beer Guide were up for playing my game.

The tasting was had. It was a lot of fun, but 9 beers of the same-ish (I explain that a bit later) style in succession starts to feel like palate torture. I did not partake, as I was the server/torturer and helped to explain what we were doing, why, and how.

Each panelist was given a handout explaining the tasting and how each beer would be scored based on the guidelines provided. The guidelines used were those from the BJCP for both German and Bohemian (Czech) pilsner. To do this, I used the two styles as a range. German pilsner is leaner and crisper in regards to malt and body, and often more hop forward. Czech pils is a bit more balanced, fuller, though neither has much in the way of richness or pronounced malt.

In addition, they were asked a handful of questions that I hope to use later in this article to offer more than just final scores. Panelists were asked their feelings (like or dislike) on pilsners, what they liked in the style and if they had a pilsner in this lineup that they felt strongly about or could pick out of the crowd.

All beers were poured, out of sight of the panel, at refrigerator temperature into small tulips intended to help capture aromas, etc. In hopes of not completely ruining everyone’s ability to taste after the first few beers, only about 3oz of each beer was poured per person at a time.

So, without further ado, the beers:

I will present these in the order that they were tasted, with average score and overall ranking listed.

I always have several concerns in doing a tasting like this. Inevitably, the longer the tasting goes on, the more palate fatigue will set in and the results of later beers will likely be impacted. Additionally, the first beer has to contend with anything and everything you’ve had to drink or eat before. I told the panel that this, apologies to Alamo, was the beer that would be sacrificed to start things off.

I’m impressed at how well it did, especially since a few of the panel had just brushed their teeth in preparation for the tasting. For the most part, no one had much in the way of negative, or overly positive, to say. Katie Frink was responsible for this beer’s highest rating of 38. Katie stated that she’s a fan of balance in a pilsner and all seemed to agree that Alamo’s pilsner was very well balanced.

A huge thank you to the brewery for making sure we had this new addition to the brewery’s lineup for this tasting. I didn’t even know this existed until Josh asked to include it.

I don’t believe anyone had gotten a chance to try this before we had it. Chris White, the kindest reviewer overall, gave Spring Pilsner its highest rating at a near perfect 49. Chris is another fan of balance, stating that Spring Pilsner is “Delicious — Everything I love about pils — Crisp, Refreshing, Clean, Awesome!” However, some felt the hop aroma was lacking.

Full disclosure, this tasting was inspired by the release of this beer, so had it not done well, I might have had to scrap the whole thing. That said, I didn’t think it was going to do as well as it did! My tastes are more toward aggression though, even in pilsners. Again, this is the Icon Red we all fell in love with that was an unfiltered, unpasteurized, dry-hopped beauty.

This beer was at or near the top for everyone, but did not see the dramatic fluctuation that some other offerings did. In addition to being #1, the feeling was nearly unanimous. Ms. Alice Hicks gets the gold star for Highest Rating, at 44. I will tell you that not only did she say she was a fan of 5 o’Clock over all others before the tasting, she picked it out of the lineup before I revealed. The panel seemed to agree that it was crisp, well-balanced and complex.

This is another that got me thinking about this tasting, because it has been a favorite since I first had it. We were supposed to see cans in central Houston by late March. Outer Houston (north and south) has already seen it through a different distributor network, but we are still without until May-ish in the interior. Until then, a big thank you to Josh for picking this up at Nobi for us!

Chris, friendliest of all panelists to pilsners, gave this a perfect 50, but I’d like to mention Jeff’s 47 rating. Jeff stated in the beginning that he prefers a hoppier pils and loved Live Oak because it’s “my favorite type of pilsner. Very crisp, hoppy, refreshing. 10/10 would drink again.” More accurately, it was 19/20 Jeff…A favorite and a must-try for anyone who hasn’t had it!

This wasn’t even originally on the list when things got setup. When Josh and Katie stopped by Nobi to grab some Live Oak Pilz, they decided to grab a growler of this as well. With it ending up #2, I’m glad they did! The sleeper hit of the tasting, had anyone known what they were drinking, I don’t think anyone would have expected it to do so well. No one’s talking about B-52 Payload Pilsner and that has to change!

Patrick O’Connor was in town from Chicago and provided a fresh set of taste buds for our tasting, adding, “being a northerner, I have no pony in this race.” He gave Payload its highest rating of 42. Clean, balanced and soft were his thoughts beyond, “just want more of this one.” Most seemed to agree with the idea of balance, but the balance seemed to be between more pronounced flavors that not all were fans of.

I’ve become a Real Ale fanboy and have shouted my love of their lagers recently, so I will be the first to express surprise and moderate disappointment at this result. Hans’ is a great “go-to” beer, one that Katie said, “has served as an attempted gateway for my family due to its easy drinkability and the fact that it is relatively well-balanced.”

Alice scored this one highest at 38. Many mentioned a perceived dryness in comparison to the rest of the beers, but most still felt it balanced.

In fairness, the liquid is Colorado born, but this was a chance to talk about the Oskar Blues Brewery currently being set up in Austin. Years ago, Texas was macro territory, but craft finally started to catch on and everyone has wanted a piece. Now Texas has gotten to a point where we’re on the list of places for breweries to set up a second location? I’ll take that!

Cody was at the top of the ratings this time with a 40 out of 50. Many mentioned a lack of aroma and pronounced malt sweetness being some of the reasons they dinged the rating.

Quite possibly the first beer labeled ‘pilsner’ or the shortened ‘pils’, that many Houston beer drinkers have tasted. Saint Arnold is all about balance, so it should come as no surprise to anyone that they have two balance-driven pilsners. Admittedly, Summer Pils has won medals for the less hoppy German Helles lager style.

Chris, once again, grabbed top billing on the ratings here with a 47 and an “I could drink a lot of this.” Despite that win for a less hoppy style, Colleen still found some hop flavor, but not much aroma.

This is one of my favorites, but because I’m not the biggest fan of balance. The hop-forward approach taken by Austin Beerworks here caused many to take a step back, even at the end of the tasting. After all of those beers so similar in flavor, this little extra hop was a surprise.

Katie scored this one the highest at 42, despite her love of balance and easy drinking. She did say it has a “very crisp flavor, well balanced overall,” but mentioned, “being able to distinguish the unique flavors coming through from the hops.”

Divine Reserve 16 - A review and commentary

ABOUT THE AUTHOR Joey Williams