NOLA Brewing to Launch in Houston

I am honored to be collaborating with Houston Beer Guide. If you get a chance, check out my website BrittskiBeers.com where I write about my beer travels around Texas, America, and the world. Cheers! 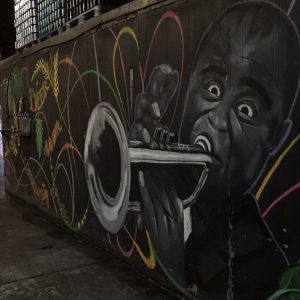 The New Orleans vibe oozes from NOLA’s brewery on Tchoupitoulas

Not long ago, it seemed that all beer in New Orleans was mopped up from the gutters of Bourbon Street and served to patrons who didn’t know a good beer from swamp water. Thankfully, the times changed when NOLA Brewing burst onto the scene in 2009. Since becoming the first brewery located in New Orleans post-Katrina, NOLA has continually offered an impressive year-round lineup of beers along with an increasing array of seasonals, sours, barrel-aged beers, and various one-offs.

NOLA Brewing plans to start distributing in Houston with Flood Distribution in the next month or so. Apparently the Big Easy attitude even carries over to brewery launches outside New Orleans. I had the opportunity to talk to both NOLA and Flood about the impending release, and all parties including myself are very excited. NOLA originally reached out to Flood because they wanted to make their Texas splash by first releasing their beer in a fellow bayou city with which they have shared Gulf Coast culture and history. They also have great respect for Flood’s portfolio and their independent craft-centric approach to business. The pair are choosing to release some unique year-round beers with their 7th Street Lemon Basil Wheat, tallboys of the Irish Channel Stout, a selection of tasty IPAs, as well as their seasonal releases. In addition to these standard beers, Houston will be seeing the full selection of NOLA’s excellent Funk Series and some other limited release barrel aged beers. 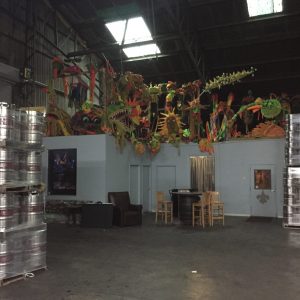 Mardi Gras dragons meet you in the brew house

When I met up with Davis Cranford, VP of Sales for NOLA, at the brewery, he gave me a taste of the New Orleans hospitality and brewing creativity that Houston can expect from NOLA. I sampled the Blues Tent blueberry sour, the Bramble On blackberry and boysenberry sour, and Rubikcubism, a funky Mosaic dry hopped IPA aged in chardonnay barrels. I even had the chance to pull some nails in their sour barrel room with Dylan Lintern, COO and barrel wrangler extraordinaire. He offered me a taste of an in-progress sour stout, and my socks were sufficiently blown off – Jester King Funk Metal may soon have some competition in its home market. Kyle White of Flood told me that they eventually plan for NOLA to hit all of Texas, but both he and NOLA want to make sure that the Houston market is properly taken care of before expanding.

As a Houstonian of 12 years, craft beer nerd, and a frequent New Orleans visitor and soon to be resident, I am super pumped for NOLA to come to Houston. The geographical and cultural connection to the Big Easy is already very tight, and the beer connection is about to become a lot closer. NOLA will be bringing some great beers to our market, and any visitor to New Orleans should absolutely stop by their brewery to check out what they’re doing. They often have tap room only one-offs along with a great environment for hanging out. And free beer on Fridays! Tell them Brittski sent you and prepare to receive confused looks and perhaps even a drunken shout out from myself across the bar. My only lingering question is who will be the first Houston brewery to collaborate with our I-10 neighbors? Whoever delivers, I promise that I’ll drink a lot of that beer!

ABOUT THE AUTHOR Britt Antley

Britt is a native Texan, lived in Houston for 12 years, and is loving life in the Big Easy (although his liver is not as happy). His liver is also not nearly as proud of his 8600+ Untappd uniques as he is. Stupid liver. He loves flavorful complex beers from juicy IPAs to fruited sours to barrel aged stouts, and he has vowed to some day be buried with a 4-pack of Yellow Rose. Follow his beerventures on brittskibeers.com.