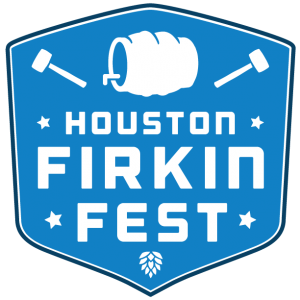 The third annual Houston Firkin Fest will be held on April 30 at Hennessey Park next to Saint Arnold brewery. So, what exactly is a firkin? According to Webster Dictionary a firkin is, “a small cask used chiefly for liquids, butter, or fish.” It is also a specific size holding 72 imperial pints or 10.79 US gallons (because this is America after all). It can be wooden or metal, and if you’ve ever seen one tapped, you would probably remember it. To open the air sealed firkin, the cask is laid on its side and a spout is driven into it with a mallet. It’s pretty cool if you ask me and one of the exciting things to watch for at the festival.

Why would a brewery use a firkin over a regular keg? Well, the firkin lends itself better to allowing natural conditioning and makes the beer have a smoother finish because of the lack of CO2 needed. It is also an outlet for a brewery to try something special like adding fruit, chocolate, coffee, spices or any other adjunct that the brewery wants to experiment with. Breweries now a days seem to like to use these to add an adjunct to a beer that they commonly brew, and that is what makes this festival so exciting. These beers will be unique. Yes, some of the breweries will have firkins of something they regularly sell, but just putting that in the firkin will change it a bit. In addition, this year there will we a draft wall with 10 limited releases from the participating breweries.

Check back as the festival nears as we will update this article with the full beer list, and check back after the festival as I will be writing up a review. I’d love to hear about what you’re drinking and enjoying most that day. So, write a comment after the festival, or better yet, come say hello if you see me; I’ll be out there enjoying it.

If you get the urge for more carbonation, this year Firkin Fest is offering some traditional draft options as well.

Parking: Free at Saint Arnold as well as on street