Call it serendipity, call it beer Karma, call it whatever you want. I recently wrote about how I think Houston’s ideal beer style is the Saison. While there are were several examples of the style available at the time, none were quite the pepper-forward version of the Saison style that I absolutely love. That is, until Buffalo Bayou released their Rotundone Saison. 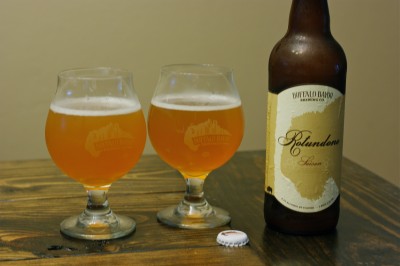 On the side label, Buffalo Bayou explains that the name Rotundone comes from the flavor compound that is most often described as “peppery” (referring to black pepper, not the spicy vegetables). This flavor is found in, well, peppercorn, some grape skins, and it is often a flavor produced by Belgian yeast strains during fermentation. While Rotundone likely would have had this peppery flavor from the yeast alone, Buffalo Bayou added green and pink peppercorns to highlight this flavor.

They go on to say that 1 in 5 people are not sensitive to the Rotundone flavor, so your experience with this beer may be entirely different than mine.

While pouring it, a peppery spice aroma wafts up to your nose. I was afraid a beer named after the flavor of pepper, with pepper added, would be a pepper bomb, but that is not the case. The aroma is subtle, but distinct.

It is very hazy, typical of Saisons, which are a little less refined than their British or German counterparts. When pouring the beer, it grows a thick head of foam, but that quickly retreats to a whispy band around the edges of the glass. Eventually, there is only a raft of fine bubbles floating in the center of the glass. 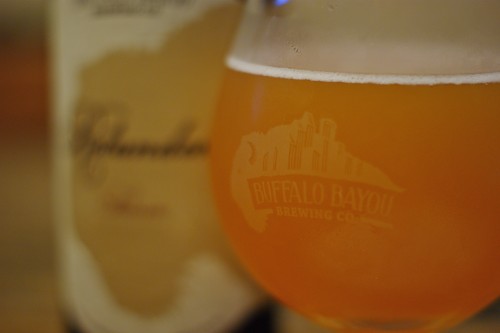 In the first few sips, the pepper was a dominant flavor, with a little bit of sweetness on the finish. As it began to warm, that sweetness transformed into baked apples. A slight hint of lemon began to show through toward the end of the glass. While waiting for it to warm, I took long pauses between sips. During those pauses, an earthy, woody flavor stuck around in my mouth that bordered on savory. This is really the only hint that the pepper flavor comes from something other than the yeast.

The oats give this a full body, and it doesn’t have a lot of carbonation. You won’t find me drinking this by the pool, but it would be a great beer to sit out on the porch with. Something about the old-world flavors make you want to be outside while you enjoy this beer.

Typically, Buffalo Bayou is not known to stick to style guidelines. In this case, they hit very close to the mark. At 8.2%, the ABV is a little high. However, Boulevard’s Tank 7 is often considered one of the primary examples of the style, and it comes in at 8.5% , bringing with it a noticeable alcohol heat. Rotundone has no hint of it’s alcoholic heft, despite being almost as strong as Tank 7.

This is a very well made beer, and I enjoyed it a lot. Unfortunately, Buffalo Bayou is not known for re-brewing many of their beers. (They only recently brewed the second batch of Chai Porter, one of their earliest releases.)

What did you think of this beer?

Let me know on Twitter or in the comments below.

Are You Prepared for the Flood?