Untapped Festival 2015 – All the beer. All the music. All the sweat. 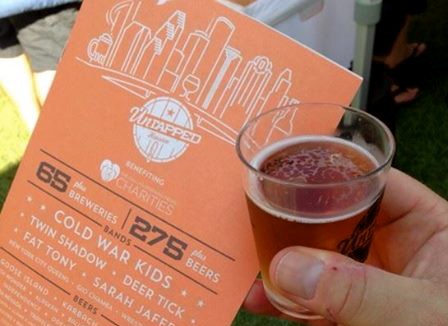 I guess third time’s a charm: after being plagued by weather problems the past two years, 2015’s Untapped Festival was a perfectly sunny sweat-drencher. The weather wasn’t the only thing Untapped got right this year: from beer selection to musical talent, this year’s line-up did Houston proud.

I got there a little later than I wanted to due to events out of my control, so I missed out on a couple rare and limited-quantity tappings (looking at you, Jester King Fen Tao and Firestone Walker Helldorado), but I got to try almost everything else on my “must-hit” list.

At the Saint Arnold tent I skipped some of the rare tappings as I’ve tried most of them before, but somehow I’d missed Divine Reserve 15 (Russian Imperial Stout), which was lovely: boozy, creamy, chocolately and pruny. I also finally tried the new Art Car IPA which had a floral nose and a crisp, fruity body with a bitter finish. I have to say I like it better than Elissa.

Too late to the party, I missed out on Pussy Wagon, but I got try Brash’s Cali Green. I’ve heard a few people criticize it for being too bitter, but I think its bitterness is well balanced with citrus and incredibly drinkable. In fact, excuse me while I go get a growler fill. 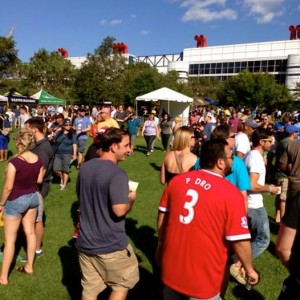 Freetail’s Oktoberfiesta, an Oktoberfest bier fermented with Belgian yeast, surprised me: clean, slightly fruity with a hint of bitterness and a caramel finish. That may not sound like it works, but it does.

I am an equal-opportunity beer-lover. I really do like most styles, and even if I don’t, I will always try them at least once. I’ve never been a fan of smoked beers, but I like to push myself outside my comfort zone. Based on recommendation and my admiration for their venerable Hefeweizen, I decided to give Live Oak’s Grodziskie and Helles Rauchlager a try. I was pleasantly surprised.

Grodiziskie is an almost-extinct Polish style made from oak-smoked wheat. More earthy than smoky, and slightly lemony, the grodiziskie is a nice alternative to a hefeweizen that would taste great with barbecue. The Helles Rauchlager is made with beechwood-smoked barley like a rauchbier, but pale like a helles lager. It is dry and aggressively smoky, but the clean noble hops shone through and created a very refreshing, summery brew. With all the single-hop beers out right now, it was a nice change of pace to try some styles that are, as Jason from Live Oak said, “more like an orchestra than a solo.”

Moving onto beers from outside of Texas, SanTan Moon Juice, a wheat IPA with a beautifully floral and citrus nose, impressed with a nice balance of fruity and bitter, as did Founders Porter with its creamy mouthfeel, notes of coffee and chocolate, and lightly smoky finish.

I always go for favorites when I can get them on draft, so I was delighted to get some pours of Lagunitas Maximus, Victory Golden Monkey, Real Ale Devil’s Backbone, and one of my new favorites, Boulevard The Calling.

Of course, as with all festivals there are always too many beers and too little time. I missed out on several brews I wanted to try, such as 8th Wonder Mission Control and Premium Goods, Ballast Point Indra Kunindra and Even Keel, and Independence Red Bud. But, there’s always next year.

I go to a lot of festivals. Too often you have to choose between drinking great beer and listening to crappy music or listening to great music and drinking crappy beer. What I like about Untapped is that the good folks who organize it had the bright idea to make it a no-compromise situation for people like me who appreciate both beer and music. As with the past two years (thank you Suffers and Tontons), I found a new-to-me band to add to my list of local favorites — New York City Queens, who remind me of the Dum Dum Girls with the addition of, well, guys.

Sarah Jaffe surprised me; having only heard “Clementine” and a couple of her earlier ballads, I expected a folky set and instead got a guitar-driven alt rock show. I was casually interested in her music before, but after witnessing her guitar skills and falling in love with her emotionally vulnerable songs, I am now an official fan.

I have long liked Cold War Kids, and their set had moments of glory. Nathan Willett’s voice was strong throughout, but the band’s enthusiasm lagged at times. Standouts included “We Used to Vacation,” “Drive Desperate,” “I’ve Seen Enough,” and their most well-known song, “Hang Me Up to Dry.”

New this year to Untapped Houston was the addition of the Saint Arnold Game Garden tent. While I’m not a gamer, I thought it was a great idea for geeks to have another way to enjoy themselves and stay out of the heat.

Kudos to Untapped for getting all the festival elements right. I’m already looking forward to next year’s fest.