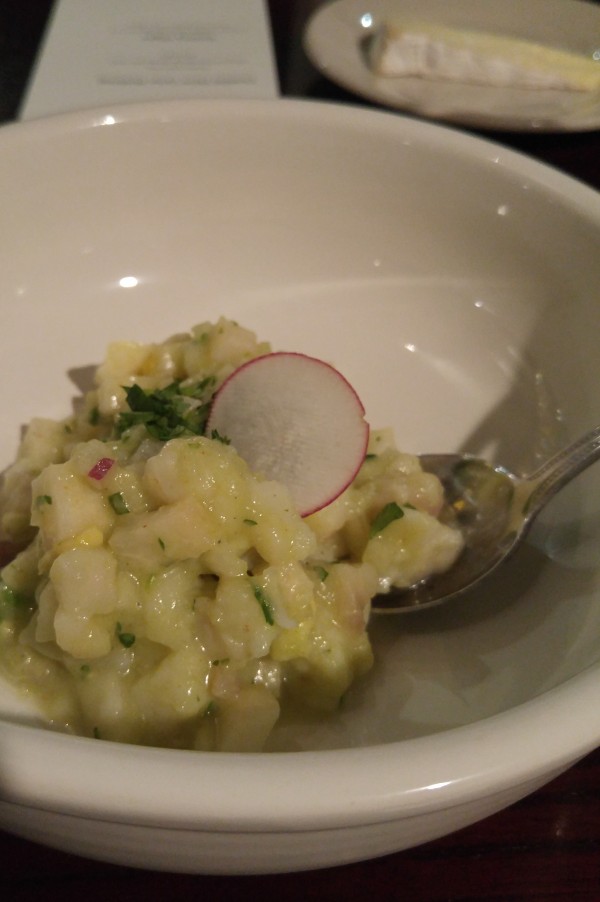 Ever since my first taste of Bayerischer Bahnhof’s Leipziger Gose, I’ve absolutely loved the gose style of beer. The mingling of salt and coriander with a sour wheat base is interesting and delicious, and the low alcoholic content is a perfect touch allowing extra enjoyment of more goses. So when I heard that the Flying Saucer, in my opinion the home of Houston’s best beer program, would be hosting a $20 gose tasting, I knew there was no chance I could pass up on it. And I’m glad I didn’t.

Led by the Saucer’s own Joshua Justice, the gose tasting started out with a glass of the recently-released Prairie Flare from Oklahoma. I found Flare to be very soft, with only a little salt and a nice hint of citrus. It paired excellently with a Peruvian ceviche and a French sheep brie. The citrus in the ceviche actually paired well, rather than distracting from the gose, and, very surprisingly, the cheese complimented the light saltiness.

Between goses, Josh treated us to information on the history of gose, including the fact that, since its invention in Goslar well before its 16-17th century migration to Leipzig, it has died out as a style three separate times. As the discussion continued, we were treated to our second pairing: Destihl’s Here Gose Nothing, from Illinois, with a smoked salmon dip. This one has been in Texas for a few months, but the first cans of it were recalled after reports of undesirable off-flavors. This time, however, the flavor was much more similar to what I recall from having had it a few years ago: lightly tart with a good balance and lime notes throughout. The smoke in the dip worked well as a counterbalance.

Those two pairings wrapped up the formal part of the tasting, but it wouldn’t be a party without party favors, and Josh and the Flying Saucer arranged a few free tastings of extra goodies that are not available for sale in Texas. The free tastings included Vermont’s Lost Nation Gose, Oregon’s de Garde Hose, and South Carolina’s Westbrook Gose, three of the more well-known goses outside our state, paired with Linie Aquavit. In addition, a few participants got to taste some even more limited free tastings, including two more beers from de Garde (Nelson Hose, which was my favorite by far, and Cherry Gose), another treat from Lost Nation (The Wind), and finally a delectable treat from Connecticut’s OEC (Artista Zynergia: Gosatequin).

To say the event was awesome would be a major understatement. There should be no surprise that the Flying Saucer would put together an event of this caliber (and price), but somehow I still left amazed. Hopefully when the next tasting is on the schedule (Josh hopes to do American Pale Ales next), you’ll be able to join!