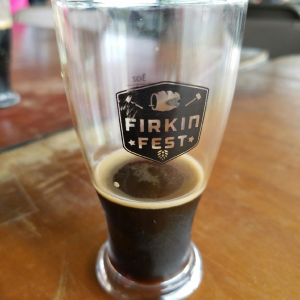 Sponsored by Saint Arnold, Real Ale, Freetail, Deep Ellum, and Texas Beer Bus, and run by the Texas Craft Brewers Guild, the third annual Houston Firkin Fest on June 18 represented the creative depth of some of Texas’s best breweries. After being moved from its original date in April due to a threat of severe weather, the organizers of the Firkin Fest did a fantastic job with the rescheduled event. The volunteers were friendly and knowledgeable, and the accompaniments to the beer such as the spicy food provided by Reigns and the buoyant Americana tunes from the band Strayhearts were enjoyable.

Held under the pavilion at Hennessy Park next to Saint Arnold Brewing Company, the small venue was a perfect setting for this bite-sized festival. The 10.79-gallon firkins used for the event allowed brewers to offer a small batch for experimentation to add adjuncts to, creating concoctions with fruit, spices, chocolate, coffee and other special ingredients. Fifteen Texan breweries brought firkins full of beer featuring everything from peanut butter to peppers.

Freetail’s Double Cherry Bexarliner was a hit. Though I prefer their more refreshing peach version, the tart Michigan Montmorency cherries in the latest of their Berliner Weisse fruit series paired well with the lactic tang of the beer. An improvement over the too-restrained single Cherry Bexarliner, which was served on the festival’s specialty tap wall, the extra cherry punch of the Double was just what the Berliner needed. Also fruity and refreshing was the addition of grapefruit to Real Ale’s White, a dry-hopped Belgian wit. Crisp with a subtle grapefruit finish, it hit the spot at the hottest time of day on the summer afternoon.

The popular variant vanilla earned high marks in its starring roles in New Republic’s Vanilla Sky, based on their Skylight dunkelweizen, and Lone Pint’s vanilla and chicory variation of their standby brown ale, Gentleman’s Relish. Though a bit overpowering in the dunkelweizen, the vanilla was a natural complement to the typical banana flavor of the hefeweizen yeast, and it tamed the boldness of the chicory in the brown ale.

No Label brought two cocktail-inspired beers: Old Fashion Ridgeback Ale and Dark & Stormy 1st Street Blonde. The Old Fashion was the more successful of the two. Bourbon cherries, bitters and orange peel added complexity to the dark amber brew and nicely accented its existing caramel notes and roasted malt. The rum-soaked ginger and lime enlivened the blonde, but the lime finish was too intense. 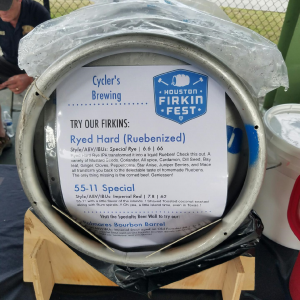 Arguably the most audacious experiment, Cycler’s Ryed Hard (Reubenized) was the brewery’s take on a Reuben sandwich. Their rye ale was made over with mustard seed, star anise, juniper berries, dill seed, bay leaves, ginger, cloves, cardamom, allspice, coriander and mace to taste like a Reuben without the corned beef: an odd beer, but it worked well.

Like any experiment, the results can vary. Sometimes the result is something you want to replicate, and sometimes it falls flat. In my opinion, Deep Ellum’s Very Berry Dallas Blonde, 8th Wonder’s Peanut Butter Chocolate Rocket Fuel, and Real Ale’s modified Real Heavy Scotch ale were misses. The Very Berry Blonde tasted like a watered-down berry lemonade, the Peanut Butter Chocolate Rocket Fuel was thin and had hardly any discernible peanut butter flavor, and the Real Heavy with English tea tips, candied figs and dried apricot had too many flavors to focus on.

A late entry in the Fest, new kid on the block Eureka Heights really impressed me with My Stoutrifice, an incredibly well-balanced milk stout brewed with Mexican cinnamon and peppers. It’s one of the best pepper beers I’ve ever had.

Those standouts were a warm-up for my vote for Best in Show: Karbach Bourbon Barrel Hellfighter Horchata. The welcoming, warm cinnamon nose invited me to drink the imperial porter. Bourbon upfront with a grainy backbone and a cinnamon finish, it was a perfect symphony of flavors and one of my favorite BBHs to date. I really hope Karbach releases this one, at least in limited batches, so more people can try it.

Though most of the beers at the Fest were variation of standards from their regular beer lines, some breweries brought unaltered brews, showing off the richer, smoother character of cask-conditioned beers. Karbach offered their lupulin bomb, Hop Delusion Double IPA; Southern Star’s newish IPA, Conspiracy Theory, made an appearance; the revered Saint Arnold Divine Reserve 15 Russian Imperial Stout came out of retirement for the occasion, and 8th Wonder’s tasty limited-release gose, Haterade, was also featured at the Fest.

One of my favorite aspects of this festival was the signage. Too often at festivals you are left on your own to figure out what you are actually drinking. Firkin Fest featured signs labeling the style, ABV, IBU and a detailed description of each beer and its transformation from its normal base into its firkin alter ego. Even better, some of the brewers were on hand to ask questions about their beers. The intimacy of the event allowed for longer discussions with the brewers, which I very much enjoyed. I’ll be back next year.