As Winter fades into the cool-ish temperatures we call winter here in Houston, the thing that gets me excited is all the local special releases of big boozy stouts. Now I could (and often do) drink stouts throughout the year, but something just hits differently when you are bundled up around a fire sipping a warming boozy stout. When deciding what to write for my first piece, sampling and reviewing stouts was a no brainer for me. I have decided that for my beer reviews, I will treat these beers as if I were judging like I do in homebrewing competitions and use the Beer Judging Certification Program categories, criteria, and scoresheet. I feel that this will help me to better organize my thoughts on the beer, as well as make the reviews a little easier to read for people. 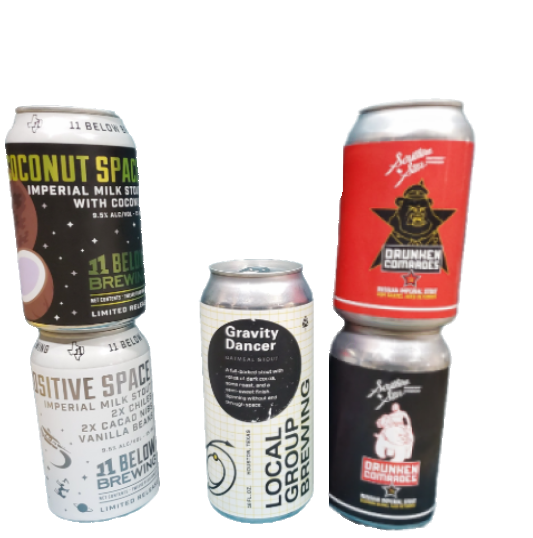 One thing that has continued to impress me is the diversity and creativity of stout styles that the HOU craft scene has been putting out in recent years. We are lucky to have stouts to fit anyone’s preferences. We have boozy Russian Imperial Stouts, sweet and creamy Milk Stouts, and even a few roasty Oatmeal stouts.

The following is just a small sample of the stout releases from the Greater Houston area, each unique and delicious in its own way. I would have loved to review more beers, but there are only so many high ABV beers I can drink and review and still retain my day job. In no particular order, here are the reviews from 11 Below Brewing, Local Group Brewing, & Southern Star Brewing.

Both beers are variants of the base beer, Negative Space. Since the base style Negative Space is known as a Sweet Stout, I will be judging each of these beers based on that style with allowances for the addition of fruits and spices.

Positive Space is a variant of Negative Space with added Chili, Cacao Nibs, and Vanilla Beans.

Appearance– Positive Space it is the color of dark chocolate and is opaque, meaning no light will shine through. When poured there is a creamy tan head that dissipates quickly leaving a ring of creamy tan foam at the top of the glass.

Flavor– The flavor is where this beer really shines. When sipping the beer, the first taste that hits your tongue is a roasty dark malt flavor with bitter dark chocolate and coffee notes. The chili in this beer lends little flavor to the beer but does add a hint of smokiness without any heat. As the beer warms the fruit flavor becomes more noticeable and is a plum/prune flavor that is like what was found in the aroma. There is no hop flavor here, but it is worth noting that even being quite a sweet beer it is still rather balanced which means the hops do lend bitterness and balance to the beer.

Mouthfeel– Positive Space has a medium body and tastes quite creamy, with a low level of carbonation. Positive Space coats the tongue with the sweetness without feeling oily, and there is an ever so slight tingle at the back of the throat that comes from the chilis. The added lactose in this beer adds extra creaminess.

Overall Impressions– Overall, this beer is an excellent example of a milk stout. The added lactose really makes this beer much creamier than its base beer, Negative Space. The cacao nibs add a level of bitterness that is not only tasty but helps to balance the sweetness that can sometimes be overbearing in some milk stouts. I wish that the chili contributed more flavor to the beer, but overall a fantastic and incredibly enjoyable beer to drink.

Coconut Space. This beer is simply Negative Space with the addition of shredded coconut.

Aroma– Boy is the coconut strong with this one! You can tell there must be a lot of coconut in this beer to come off stronger than the roasted malt. The coconut aroma is certainly more reminiscent of the fresh white flesh of the coconut, rather than toasted coconut. After the first hit of coconut there is the expected roasted coffee and bitter chocolate malt aromas. As the beer warms, the chocolate flavor becomes more pronounced. There are no hop aromas detected, and there are hints of dark stone fruit esters.

Appearance– In comparison with the Positive Space, this beer is slightly lighter in color with more of a mocha brown hue. Though dark, this beer is not completely opaque with slight ruby undertones when looked at through the light. When poured the head is a creamy caramel color and dissipates quickly with large bubbles. As with Positive Space, as the head dissipates a ring of foam encircles the top of the glass.

Flavor– With the first sip, roasted malt and chocolate come through first, followed by strong fresh coconut flavor. There is no hop flavor, but again this beer is well balanced by not being sickly sweet, so the hops are certainly there. Slight stone fruit flavor as the beer warms. My only critique is that there is a bit of a vegetal finish with this beer, which reminded me a bit of cooked green beans.

Mouthfeel– The body on this beer is medium low, which is a little low for this style. The creaminess here is perceptibly lower than Positive Space, presumably since Positive Space had the addition of lactose. There is a slickness on the tongue that might come from the oils in the coconut.

Overall Impressions– Overall this is a solid variant of Negative Space, and it certainly delivers the coconut promised in its name. Other than the slightly off-putting vegetal aftertaste, this is a solid beer.

Gravity Dancer from Local Group Brewing is an Oatmeal Stout with no additional adjuncts added.

Aroma– As expected, there is a medium amount of roasted malt flavor with bittersweet chocolate (like baking chocolate) and just a smidge of coffee and cream. Low hop aroma comes through as the beer warms with a suggestion of a floral orange.

Appearance– The color is an opaque dark chocolate brown, and when poured the head has medium to large bubbles and is light tan in color with excellent persistence.

Flavor– The first taste is a roasty malt followed by a bittersweet baking chocolate. Behind that is a bit of coffee. Low levels of citrus fruit flavor are present that could be either from the hops or the yeast.

Mouthfeel– The beer is medium-full in body and in carbonation. There is no warmth from the alcohol and a velvety smooth creaminess from the oats.

Overall Impressions– Gravity Dancer reminds me of a very mild Irish Extra Stout with more fruit flavor, creaminess, and sweetness. It is a beautiful Oatmeal Stout that is easy drinking and has a wonderful mouthfeel and flavor that can only come from Oat.

The Drunken Comrades from Southern Star Brewing Company were a release that came in a box set with 1 of each Octobrist variant.

Aroma– Not surprising is that there is a strong boozy rum aroma that hits first, followed by a roasty coffee and just a hint of brown sugar/treacle sweetness. Not surprising in this style there is no hop aroma or any fruity characteristics that I was able to pick up.

Appearance– This was an opaque black beer with a gorgeous thick tan head made up of medium to large bubbles, that dissipated quickly.

Flavor– Similar to that of the aroma, there was a strong coffee roast flavor with a big hit of rum flavor. This beer is certainly balanced and is sweet without being cloying. The roasty coffee malt flavor lingers around and the beer finishes sweet.

Mouthfeel– This had a medium body to it with a silky mouthfeel. It was carbonated fairly low, and had a slight warmth from the rum barrel aging, but nothing too “hot” or unpleasant.

Overall Impressions– Overall I like this variant of Octobrist, it was exactly what I would expect from a rum barrel aged Russian Imperial Stout. In comparison with the Bourbon Barrel Aged Octobrist, I would say I love the body and sweetness of this version the most, but enjoyed the flavor imparted from the bourbon barrel more.

Aroma– Similar profile to the Rum Barrel aged Octobrist, but instead of the Rum fruitiness, there was a boozy and a bit smoky Bourbon edge to this beer. Still have the same dark sugar and coffee aromas with the roasty malt.

Appearance– Overall same appearance as the Rum Barrel aged Octobrist. Black opaque color, with a tan head made up of medium to large bubbles. I might say this version seems a little lighter in both color and head, but it would be a miniscule difference.

Flavor– I love the bourbon flavor in this beer, it seems to bring the beer back to a drier finish which helps temper the sweetness a little bit. Otherwise, the same roasty malt backbone with supporting flavors of coffee and dark sugars.

What to Expect When You’re Expecting Not to Drink

ABOUT THE AUTHOR Tristin Marcks

My winding journey into craft beer started back in 2012 with a desire to try something other than the same old macrobrews. Now 8 years later I am fully immersed in the craft world and the local craft community, and love exploring local breweries, cideries, and meaderies. Throughout my experiences and learning about beer styles, I achieved Certified Judge through the Beer Judge Certification Program (BJCP). Most of my review pieces will focus on sensory characteristics and an overall style comparison of the beers I review. Cheers!